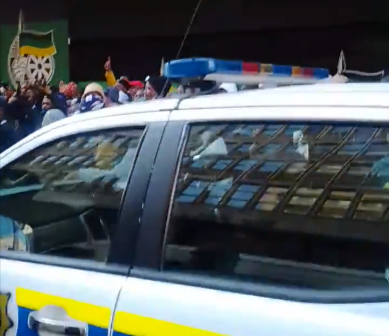 Police arrived at Luthuli House when ANC members from the North West staged a protest outside the building in Johannesburg on Friday.
Image: Nonkululeko Njilo via Twitter

This comes amid calls by politicians, civil organisations and some members of the public for Ramaphosa to step aside over allegations of a cover-up of the alleged theft of US$4m at his Limpopo farm Phala Phala two years ago.

Addressing members of the media on Friday, convener of the interim structure Dan Hatto said it was an internal matter and making a pronouncement would be an act of ill-discipline as the party undergoes renewal.

This despite the previous leadership being vocal about issues of the day.

“Unfortunately, we do not have anything to say on the Phala Phala issue. It’s an ANC matter, it’s the president that has been implicated in that, until such time that the ANC has completely dealt with it, [we will not comment].

“Remember we talk of renewal, we talk about assisting the ANC. And definitely, we are not going to be solving all problems of the ANC but we want to move along with the ANC,” Hatto said.

The veterans briefed the media on their upcoming visit to KwaZulu-Natal which, among other functions, is aimed at facilitating closer working relations with provincial and local government structures in accelerating benefits to former veterans. These, according to Hatto, include housing, education, health, job opportunities and business.

The briefing was nearly derailed after a group of disgruntled protesters descended on Luthuli House to express grievances related to disputes in their branches. They demanded to be addressed by the national leadership.

The interim committee of the organisation was elected during a conference in East London in May. It is has been mandated to unite, renew and deal with the welfare of the community of former MK combatants.

Hatto admitted this would not be easy.

“The tasks ahead are daunting. However, we stand united and resolute to work closely with all sectors of society such as business, labour and civil society. Through the consistent building of strong partnerships and a cohesive social compact, we shall succeed,” said Hatto.