One dead, another narrowly escapes as West Rand residents descend on illegal miners

Community members head to illegal mining sites in an attempt to root out zama-zamas.
Image: Screengrab/Suppled

At least one person has died after a day of protest action on the West Rand, where the community is on a mission to rid the area of illegal miners.

Col Noxolo Kweza said a man's body was found dumped in a field in Chamdor, near Krugersdorp.

It was not immediately clear whether he was an illegal miner.

"The police have dispatched the necessary crime-management team to the scene," said Kweza.

She did not reveal how the man had died, saying it was part of the investigation.

"Police are monitoring protests [in the Kagiso area]," said Kweza, adding a call for community members to restore calm to the township had been issued.

"When the community members arrived at shacks at Tudo shaft (in Soul City), where zama-zamas live, they started to damage their homes," said ward councillor Peter Modise.

“They found two alleged zama-zamas and one fled the scene, but the other couldn’t outrun the community. They got him and attacked him," Modise said. 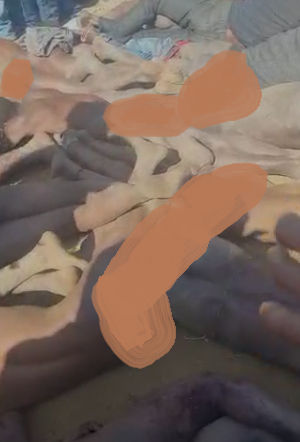 Suspected illegal miners were stripped and allegedly beaten after being found in a disused mine near Kagiso.
Image: Screengrab

The man was rescued from the mob and taken by the police.

Modise said the man claimed he wasn’t an illegal miner by choice but because of a lack of opportunities.

Meanwhile, illegal miners, allegedly from Mozambique, were stripped naked by residents. TimesLIVE understands they were found after residents searched a disused mine.

The group was allegedly assaulted.

One dead as police exchange gunfire with zama-zamas in Krugersdorp

Netcare 911 spokesperson Shawn Herbst says a man believed to be an illegal miner was shot dead after he allegedly pointed a gun at police.
News
1 week ago