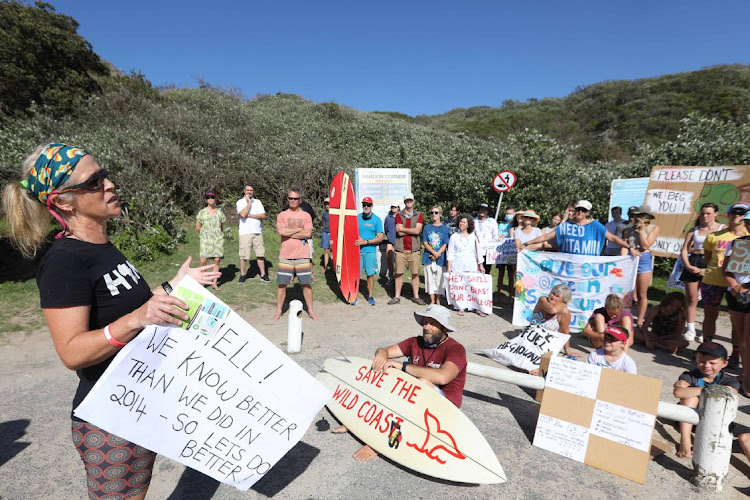 Wild Woman trail running leader Kim van Kets tells 100 protesters at Nahoon Reef on Saturday that they must have stamina for the marathon ahead in the battle to prevent Shell from blasting and drilling in pristine Wild Coast oceans.
Image: ALAN EASON

Kim van Kets, endurance athlete, adventurer and passionate advocate for our wild oceans and coast, urged the first public protest at Nahoon Reef on Saturday against Shell’s seismic blasting of the Wild Coast that this would be a “marathon” in their lives.

On Track asked Kim to spell out what she meant. Would public protest and environmental awareness  become a new aspect of our lifestyle and culture?

Here is her reply:

There are so very many things clamouring for our attention.  So many causes to fight, so many systems to be dismantled or rebuilt. So much suffering that should be stopped.  How do we choose what to focus on and how do we remain steadfast in that focus?  How do we stop ourselves from being distracted from our mission to save our coast by the next calamity?

Sometimes I think we must be able to imagine the end of things, so that we can imagine how we will come through that which we imagine

Revered Nigerian novelist Ben Okri wrote: “Sometimes I think we must be able to imagine the end of things, so that we can imagine how we will come through that which we imagine. Of the things that trouble me most, the human inability to imagine its end ranks very high. It means that there is something in the human makeup resistant to terminal contemplation.

This fight to protect the Wild Coast is an ultra-marathon, not a sprint.  We can’t afford to explode into action for a week and then run out of energy.  And even if this battle is won, there will be another and another.

Protecting our own corner of the ocean and the planet is a war we will be occupied with on many fronts for the rest of our lives. So how do we remain resolute?

Eastern Cape fury over Shell’s November seismic blasting of the Wild Coast and off Gqeberha is ringing in ears around the world. By 4pm on ...
News
6 months ago

I have adapted some of my ultra-distance running strategies to help me stay focused: