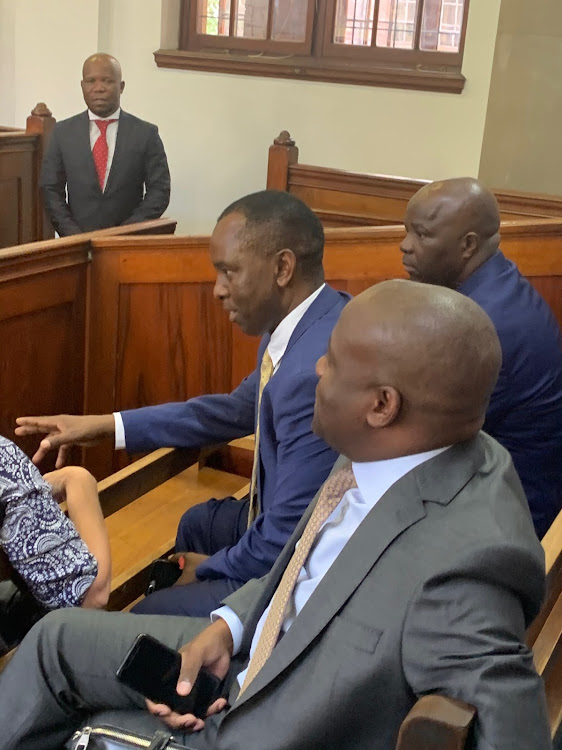 ANC MP Bongani Bongo before his appearance before the Cape Town magistrate's court. He is facing a charge of corruption. Also present are some of his ANC comrades, including MPs Mosebenzi Zwane and Mervyn Dirks.
Image: Andisiwe Makinana/TimesLIVE

The corruption case against ANC MP Bongani Bongo has been postponed to February 21.

Magistrate Louis Jacobus Human of the Cape Town magistrate's court said the matter was being postponed to February to arrange transfer of the matter to the high court.

Bongo, a former state security minister and now chair of the parliamentary committee on home affairs, is facing a charge of corruption in relation to an allegation that he offered a bribe to Ntuthuzelo Vanara, the evidence leader of the parliamentary inquiry into the capture of Eskom by the Guptas.

In a sworn statement, Vanara claimed that Bongo offered him a “blank cheque” if he would suppress the investigation.

Bongo denies the allegation and has previously accused public enterprises minister Pravin Gordhan of orchestrating the case against him. He had before that blamed former National Assembly speaker Baleka Mbete and then ANC chief whip Jackson Mthembu of being behind the allegations, claiming they were jealous of his ministerial appointment.

Controversial ANC MP Bongani Bongo was back in parliament on Tuesday, days after he was arrested by the Hawks and charged with corruption
News
2 years ago

Bongo was supported in court by a handful of ANC members, including ANC MPs Supra Mahumapelo, Mosebenzi Zwane and Mervyn Dirks, among others.

Zwane, speaking for the group of Bongo's supporters, told journalists after the court appearance that he was confident the case against Bongo would be dismissed.

“We are here to be in solidarity with our comrades. We are here to put the message across that we are law-abiding citizens, but we won't judge comrade Bongo up until this case is finished.

“We know the outcome of the case and it should not take people by surprise that we are here to support our colleague.

“It should be a logical thing to support each other during these times. He will never walk alone,” said Zwane.

He said they would mobilise more ANC members to attend Bongo's next appearance and fill up the court.