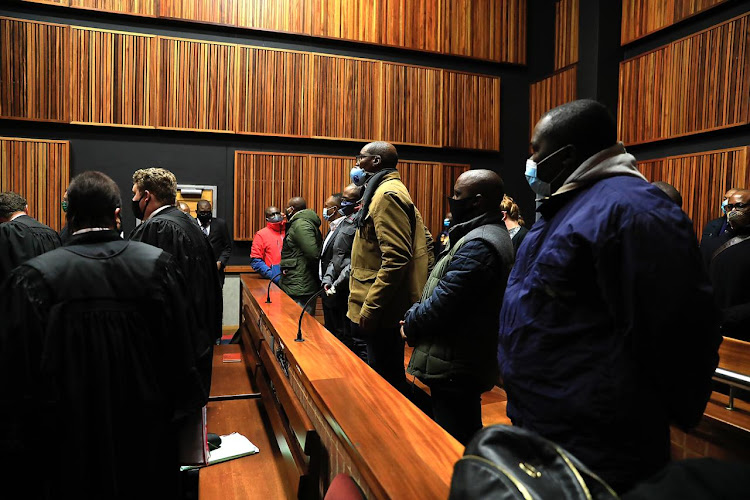 The VBS accused during their first appearance in the Palm Ridge magistrate's court on Thursday.
Image: ALON SKUY

TheANC and the EFF have welcomed the arrests of former VBS bank executives, who appeared in court on Thursday.

The bank - many of whose clients were pensioners and street vendors in Limpopo, as well as struggling municipalities in Limpopo, the North West and Gauteng - collapsed in 2018 following alleged looting by its bosses.

Leaders from the ANC and the EFF have been directly and indirectly implicated in the VBS looting.

The National head of the Directorate for Priority Crime Investigation (DPCI) says eight men have been arrested in connection with allegations of ...
News
2 years ago

“As the ANC, we welcome the work of the Hawks and other law enforcement. We expect that they move with the necessary speed towards justice,” said Mabe.

The ANC's provincial treasurer in Limpopo, Danny Msiza, is alleged to have used his political influence to sway mayors in at least 10 municipalities to invest their funds in the now defunct bank.

After the allegation against Msiza surfaced in 2018, the ANC’s integrity committee recommended that he take a break from his position in the ANC while clearing his name.

Msiza was not the only ANC leader implicated. Deputy provincial chairperson Florence Radzilani, who was also mayor of the Vhembe municipality, met the same fate as Msiza. She was asked to step aside from her ANC duties and resign as mayor.

Mabe said the two had appealed their sanctions from the integrity committee.

“They have since appealed the ruling of the integrity commission. The expectation is that they will be listened to and be afforded an opportunity to state their own case. The process is ongoing and decisions will be communicated in due course,” he said.

The Hawks are closing in on those involved in the looting of the now defunct VBS Mutual Bank, with eight arrests confirmed on Wednesday.
Politics
2 years ago

Further investigations by the media following the official report by advocate Terry Motau allege that the EFF – including Floyd Shivambu and party leader Julius Malema – benefited indirectly from the loot that was for Brian’s benefit, in the form of companies linked to Floyd Shivambu and Malema that did “business” with Brian’s company Sgameka.

Pambo said the EFF maintained that no EFF leader was involved in any wrongdoing relating to VBS.

“We welcome these arrests because an opportunity will be presented in neutral courts of law to present hard facts and evidence,” he said.

Despite the allegations against the party's leadership, he said there had been no wrongdoing or criminal activity committed by them.

“We will closely monitor the developments and believe that the process under way will be conducted in a free and fair manner, so that justice prevails and that the legal principle of ‘innocent until proven guilty’ is followed both in letter and in spirit.”