Trump claims he no longer has Covid-19 and is immune 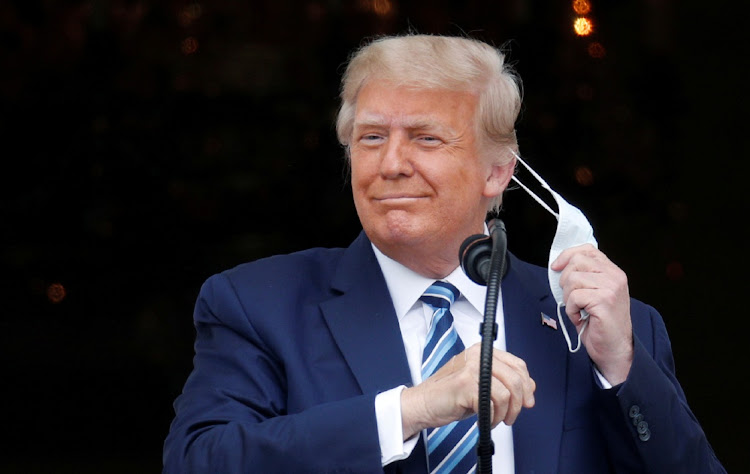 US President Donald Trump takes off his face mask on a White House balcony to speak to a gathering that the White House called a 'peaceful protest' in Washington, the US, on October 10 2020.
Image: REUTERS/ TOM BRENNER

US President Donald Trump said on Sunday he was now immune after fully recovering from Covid-19 and was not an infection risk, freeing him to return to holding campaign rallies during the final weeks of the race for the White House.

The comments from Trump came a day after his doctor said the president had taken a test showing he was no longer infectious. He did not say directly whether Trump had tested negative for Covid-19.

Trump, who is trailing Democratic rival Joe Biden in opinion polls, is eager to get back on the campaign trail after an absence of more than a week. He plans to travel to the key battleground state of Florida on Monday, followed by rallies in Pennsylvania and Iowa on Tuesday and Wednesday, respectively.

The president, who spent three days in the hospital after revealing he had tested positive on October 2, said he was no longer on medications for the coronavirus.

“It looks like I'm immune for, I don't know, maybe a long time, or maybe a short time. It could be a lifetime. Nobody really knows,” Trump told Fox.

The scientific evidence has been inconclusive on how long people who have recovered from Covid-19 have antibodies and are protected from a second infection.

The president's illness has put a focus on his handling of the coronavirus pandemic, which has infected nearly 7.7-million people in the US and killed more than 214,000. His administration has faced criticism for its lax approach to wearing protective masks and social distancing in the White House. At least 11 close Trump aides have tested positive for the coronavirus.

Opinion polls show Biden with a substantial lead nationally, though with a narrower advantage in some of the states that may decide the November 3 election outcome.

“Now you have a president who doesn't have to hide in the basement, like his opponent,” Trump said in a shot at Biden, who he has mocked for wearing a mask and keeping a light, socially distanced campaign schedule.

Trump addressed supporters from a White House balcony on Saturday afternoon, urging a crowd of hundreds of largely Black and Latino supporters to help get out the vote.

Standing alone at the event, Trump was not wearing a mask as he spoke. In the crowd, most were wearing masks but not following social distancing guidelines.

With Trump's management of the pandemic dominating the campaign, a Reuters/Ipsos poll showed Americans steadily losing confidence in how he has managed the health crisis — with his net approval on the issue hitting a new low.

Biden was off the campaign trail on Sunday, attending church in his home state of Delaware and addressing a virtual fundraiser where he told donors the country was being “ripped apart” by Trump's divisive policies.

Trump repeated on Sunday his past calls for states to reopen their economies even as the pandemic shows little sign of abating. New cases of Covid-19 in the US hit a two-month high on Friday.

The US is reporting on average 48,000 new cases a day and coronavirus hospitalisations in the Midwest hit a record for a sixth day in a row on Saturday, according to a Reuters analysis.