'The continuing persecution of Zuma has gone too far': Carl Niehaus 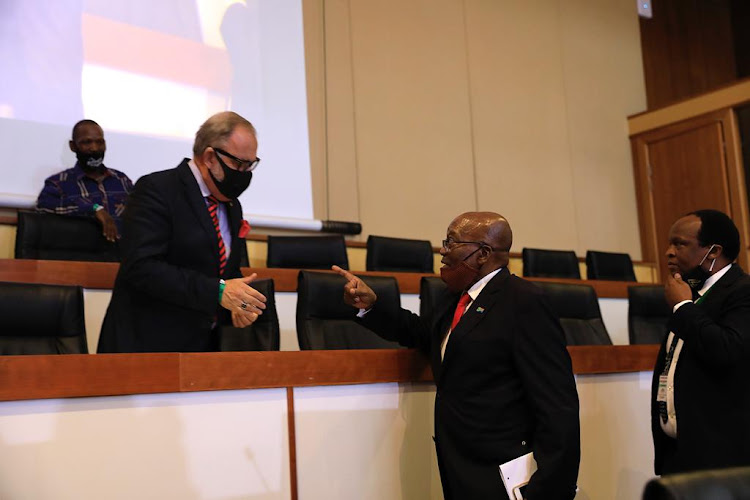 Carl Niehaus greets Jacob Zuma at the Zondo commission on November 17 2020. Zuma and ANC secretary-general Ace Magashule are some of the leaders that have been “humiliated with politically motivated charges”, says Niehaus.
Image: ALON SKUY​

Umkhonto we Sizwe Military Veterans Association (MKMVA) spokesperson Carl Niehaus has called for an end to the "persecution" of former president Jacob Zuma.

This comes after Zuma appeared at the commission of inquiry into state capture on Monday to request that deputy chief justice Raymond Zondo recuse himself.

Niehaus said the persecution has gone too far, and was “enough”.

“This must end! The continuing persecution of Zuma has gone far too far. Enough is enough!” he said.

This must end! The continuing persecution of @PresJGZuma has gone far too far. Enough is enough! pic.twitter.com/tevJkAfzhS

According to Niehaus, Zuma and ANC secretary-general Ace Magashule are some of the leaders that have been “humiliated with politically motivated charges”.

“Our leaders get humiliated with politically motivated charges. We cannot allow this to continue. Yesterday thousands of members of the ANC spoke. Enough is enough!”

Our leaders get humiliated with politically motivated charges. We cannot allow this to continue. Yesterday thousands of members of @MYANC spoke. Enough is enough! pic.twitter.com/eQhD4G7ErW

The commission was set to continue with Zuma's application for the recusal of Zondo on Tuesday, but Zondo announced that he was not ready to deliver his ruling on the application. He set the day aside to work on the ruling, which he promised to deliver on Wednesday at 10am at the earliest.

On Monday, the commission heard arguments from Zuma’s legal representatives during an application for Zondo to be recused.

In a 100-page affidavit that was filed in support of the application, Zuma said Zondo “wishes to implicate me at all costs” and that his application for his recusal was serious.

“I genuinely apprehend that he wishes to implicate me at all costs. Though a commission of inquiry makes recommendations, the reputational implications are enormous on people’s lives,” said Zuma.

“Though I remain committed to assisting the commission, the continued role played by the chairperson leaves me with a clear view that my fate has been sealed. I cannot appear before a chairperson who seems determined to find me guilty, regardless of the facts.”

Zuma also cited “family relations” with Zondo as a reason for his recusal. Zondo disclosed last month that he had a child with the sister of Zuma's wife Thobeka Madiba.

However, Zondo said his personal relationship with Zuma was “cordial and pleasant” but did not generally involve discussions of “serious matters”.

“This had to be so because we would normally interact when we met at the opening of parliament or other government or state functions,” said Zondo.

Zondo also said he and Zuma were not friends, as stated by the former president.

The Ahmed Kathrada Foundation, together with 27 other civil society organisations, has urged former president Jacob Zuma to appear before the ...
News
1 year ago