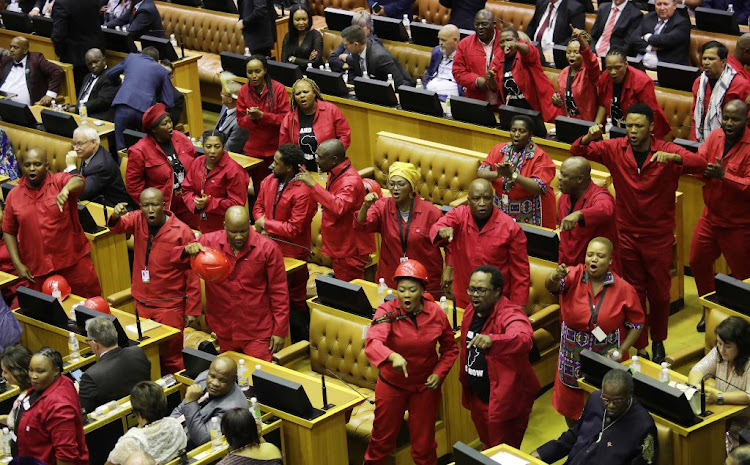 Public enterprises minister Pravin Gordhan had to be escorted to safety after being confronted by EFF members when trying to deliver his 2019 budget speech in parliament. File image.
Image: ESA ALEXANDER/SUNDAY TIMES

National Assembly house chairperson Grace Borotho says she was scared that EFF MPs would beat up or even stab public enterprises minister Pravin Gordhan during a fracas in parliament.

The incident, in mid-2019, came when EFF MPs tried to stop Gordhan from delivering a speech in parliament and rushed the podium.

Borotho was giving evidence before parliament's powers and privileges committee, which is conducting a hearing into the events of July 11, 2019, which saw Gordhan being whisked away from the podium as EFF MPs charged towards him after having threatened that they would stop him from speaking in the debate.

Borotho was presiding over that July 11 session.

TONY LEON: Are the EFF’s tiresome tactics comparable to the Nazis?

The DA’s Bongi Madikizela has received huge backlash for his comparison, yet the seeds were planted by the ANC
News
1 year ago

After instructing several EFF MPs to take their seats, to no avail, she called in the sergeant-at-arms and parliament's so-called “bouncers” to eject the disruptive MPs from the session.

During the rowdy sitting, EFF MPs moved towards Gordhan, who was on the podium to deliver his department's budget vote, after one of their own, Sam Matiase, declared that they would not allow Gordhan to deliver the speech.

They argued that the minister should not speak because he was a “constitutional delinquent” after adverse findings against him by public protector Busisiwe Mkhwebane over his role in the supposed establishment of the Sars “rogue unit”.

“He just moved towards the member on the podium [Gordhan]. I have never seen that before. He was moving towards the minister and I was not sure what's going to happen, but I was afraid because already there was a threat that this man is not going to speak today. Maybe the threat was unfolding. I could not just wait,” Borotho said as she explained why she repeatedly called on the sergeant-at-arms and the chamber support officers to eject the disruptive EFF MPs.

Borotho said she panicked when EFF MPs approached Gordhan, and she could not see what exactly they were doing to him — but could hear Gordhan daring them to touch him.

Union 'inundated' as police complain about 'threats' by Julius Malema

Borotho said because of these words by Gordhan, she said the EFF MPs were possibly touching him or reaching towards him, and that somebody else was trying to protect Gordhan.

She said had Gordhan been physically assaulted, it would have “gone very bad” and would have been bad for the image of parliament.

Borotho was one of three witnesses called by the committee.

The other two — Collen Mahlangu, the under-secretary of the National Assembly's table and Tebello Maleeme, the acting sergeant-at-arms who were both on duty that day — told the hearing that unlike other disruptions in parliament, this had been unusual because EFF MPs physically charged towards Gordhan.

Both said there were shocked by the events.

Sixteen EFF MPs are facing contempt of parliament charges for their role in the disruption, which saw Gordhan escorted away from the podium.

The EFF has threatened to go to court to challenge the parliamentary rules and laws the institution is relying on to discipline its MPs. The party also wants a retired judge or senior counsel to preside over the process, saying the current composition of parliament's powers and privileges committee would unfairly prejudice EFF members.

The committee will meet next month for closing arguments.