ANC deputy secretary-general told the SABC she doesn’t believe Magashule personally leaked the audio, but she believes his supporters were behind it 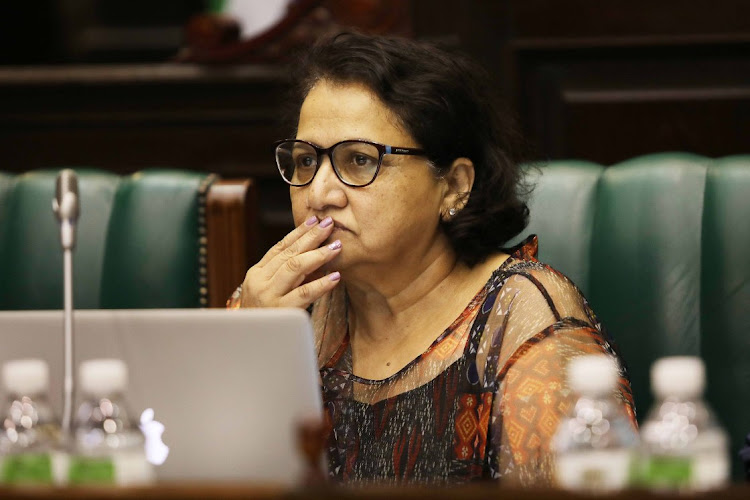 In the audio, which was widely shared, Duarte was heard telling the national officials, called the top six, she believed Zuma should not appear before deputy chief justice Raymond Zondo at the state capture inquiry.

She has since received criticism for those remarks.

Duarte told the SABC that although she doesn’t believe Magashule personally leaked the audio, she believed supporters of the secretary-general - seemingly those working in his office - were behind it.

“I think it is people who are in support of the secretary-general who are doing this, frankly and honestly speaking, whoever they might be,” Duarte said in the interview.

“I don’t think it’s the SG himself, but I think it’s people who support him, who are sitting in a dark room somewhere cooking up all manner of, pardon me for saying this, crazy antics.”

Regarding her leaked comments in the audio, Duarte said she was speaking freely in a private conversation and that despite her views about the inquiry, she abided by the ANC’s decision to support it.

“The position of my organisation is that we support the Zondo commission. I respect that position irrespective of my own views. We respect the commission,” Duarte said.

“We go to the commission. I was there yesterday [Wednesday]. I went with [ANC national chairperson] Gwede Mantashe. We prepared the submission of Gwede Mantashe together with Krish Naidoo [acting as the party’s legal adviser at the commission]. I have sent to the Zondo commission three separate submissions they asked me to do,” she said.

Asked why she thought Magashule’s supporters were behind the leak, Duarte said this was because they wanted her to be part of Magashule’s faction but they targeted her and leaked her part of the meeting, perhaps, after realising that she wasn’t.

“I think in this case, if I’m looking at it properly, and I look at the events following up to that particular leak, the previous [leaks] from the NEC showed people who were speaking in favour of the secretary-general only. The voices of other people were not leaked, strangely enough,” she said.

Duarte called on Magashule to speak out against his supporters who were campaigning for him against the ANC.

ANC deputy secretary-general was scathing about judge Raymond Zondo’s conduct despite having apologised to him for similar attacks in February.
Politics
1 year ago

She said that on top of being behind the leaks, his supporters were also branding taxis with ANC colours and emblems saying “hands off Magashule”- something to which she took exception  - and staged a protest at the party’s headquarters on Wednesday.

“I think that’s helpful and will help the organisation,” she said.

Duarte also urged Magashule to accept the decision taken by the NEC that those facing corruption charges or other serious crimes should step aside at the end of the month.

She said as much she understood Magashule would want to fight for his political life, he should do so while following the rules of the ANC.

“One would hope the SG would accept that particular perspective of himself as a very senior member of this organisation. He’s not junior. The SG is very senior and he’s very knowledgeable in terms of what the ANC rules are. He’s been in the NEC of the ANC since 1992, the first conference in Durban. He has been around. He’s been party to the decisions of the national executive committee,” Duarte said.

As Magashule’s deputy, Duarte would be in charge of the secretary-general’s office by the end of April and would have the powers to suspend him should he not voluntarily step aside.

She said she would implement the decisions of the party because “at my level, when a decision is made my responsibility is to execute that decision”.

In the tell-all interview, Duarte also made it clear she was not in Magashule’s camp,  adding she would be against anyone who sought to destroy the party.

“We might have differences of opinion on the economy, on everything else, but you know what, we cannot be the ones who lead to the demise of the ANC. Let me speak for myself, I have to say, I’ll have to stand against no matter who it is.

“Once you start giving me the impression that you’re ready to break the ANC then I’m on the opposite side of you,” Duarte said.

Seemingly taking a jab at Magashule and his supporters, Duarte also said there were a “number of actors” in the country who were hellbent on breaking the ANC by denuding its efficacy, values, culture and customs to ensure their favourite leaders emerged victorious.

“You must defend yourself, I accept that entirely, and you must also ensure there’s fairness and justice in any process the ANC embarks on. I stand firmly by that. But please do not work in such a way that you begin to create chaos that the ANC finds hard to explain to the people,” she said.

She urged Magashule to mobilise his supporters “soberly” and with “content” and “context so that I as an ordinary member can understand you [and] know there’s a grievance”.