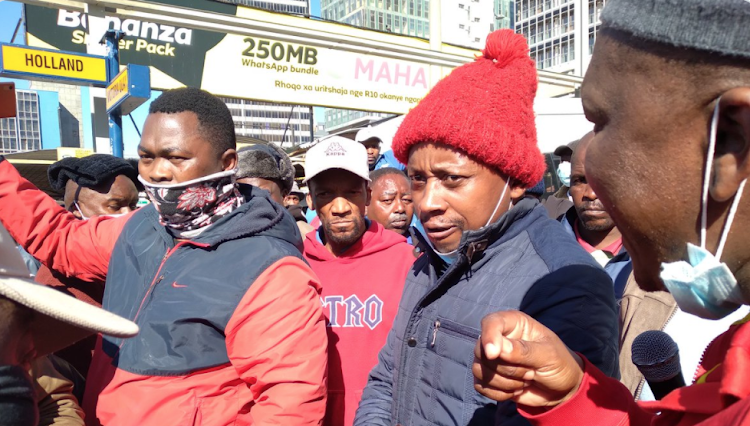 Former Nelson Mandela Bay councillor Andile Lungisa was given a tough time by taxi drivers and the public at several Bay ranks on Thursday.

Lungisa was requested by the local taxi industry to accompany them to various ranks on Thursday to address rumours he had allegedly been seen driving around mobilising for the Pier 14 shopping centre in North End to be looted.

The disgraced former councillor had grabbed the headlines recently after making a call for a national shutdown in support of former president Jacob Zuma, who has since been jailed at the Estcourt Correctional Services facility.

Lungisa, a long-time Zuma supporter who was suspended from the ANC for 18 months on Wednesday, did not receive a warm welcome at the Terminus taxi rank in Gqeberha’s Govan Mbeki Avenue.

Taxi drivers at the rank could be heard shouting:  “Why are you misleading people?”

Taxi drivers are questioning #AndileLungisa about rumours that he was driving around in big cars mobilising for looting in Pier 14 centre. Lungisa dismissed the claims saying he was at the police station the whole day. #SAShutdown #NoToLooting
📹 @YolandaPalezwe1 pic.twitter.com/wLBiFyeVeS

On Wednesday, taxi bosses had demanded that Lungisa join the industry in their convoys around the Bay to ensure there was no looting at shopping centres and also to convince the public that he was not in favour of any instability or violence.

Gauteng and KwaZulu-Natal have endured several days of destructive looting and violence, resulting in national fuel and food supply lines being disrupted.

Lungisa explained to people at the Terminus rank that his address followed a meeting with taxi bosses.

“It was agreed that I would move across the metro denouncing looting.

The rumours about my [alleged instigation] were because I am a Zuma supporter and opportunists want to use that against me,” Lungisa said.

Lungisa was also made to visit the taxi rank in North End, near Pier 14, with a visit to Kariega planned as well.