Malema challenges SANDF: 'Bring it on, I’m not scared of rubbish' 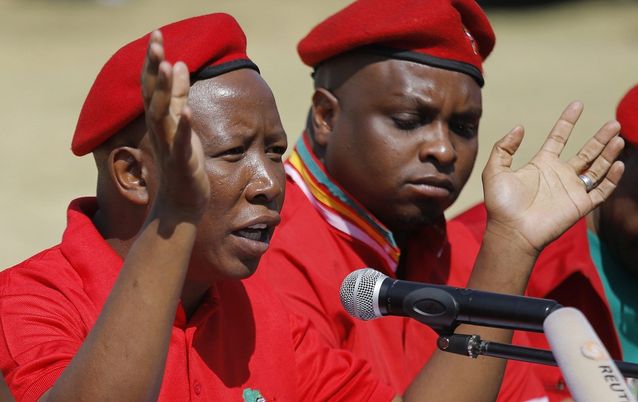 EFF leader Julius Malema has challenged the SA National Defence Force (SANDF), telling officials to “bring it on” in reference to any potential legal action against him.

Malema sparked debate on social media recently when he shared a message allegedly from a soldier deployed in KwaZulu-Natal pleading for help, and claimed "the army is threatening to withdraw”.

The SANDF dismissed the claims, labelling them as "baseless insinuations aimed at causing panic in the country”.

"Perpetrators of these insinuations are reminded that it is an illegal and a prosecutable offence to spread fake news or misinformation,” it added, without mentioning Malema by name.

Responding to the criticism, Malema welcomed any potential attempt to prosecute him.

Rubbish, try me bloody fools. Bring it on, I’m not scared of rubbish.

He questioned the SANDF's stance and its ability to feed soldiers, saying it was a “disgrace”.

Unfortunately you can’t prosecute anyone because now one spread fake news or misinformation about you. The reality and indisputable fact is that you can’t feed your soldiers and ground forces. What kind of a so called army are who can’t give food to soldiers? Disgrace! https://t.co/RlUVJeRwSJ

Attempts to get additional comment from Malema and Shivambu were unsuccessful at the time of publishing this article. The article will be updated once comment is received.

Speaking to TimesLIVE on Tuesday, SANDF spokesperson Brig-Gen Mafi Mgobozi acknowledged there had been challenges regarding ration packs and meal allowance payments.

“There were delays in the availability of ration packs and the payment of meal allowances, only in KwaZulu-Natal. The delays were because of administration errors. These delays have been urgently addressed and the challenges largely resolved.

“Most soldiers have received either their meal allowances, which troops use to buy their own food, or their ration packs,” said Mgobozi.