Steenhuisen proud of DA's recovery since Maimane 'turned his back' 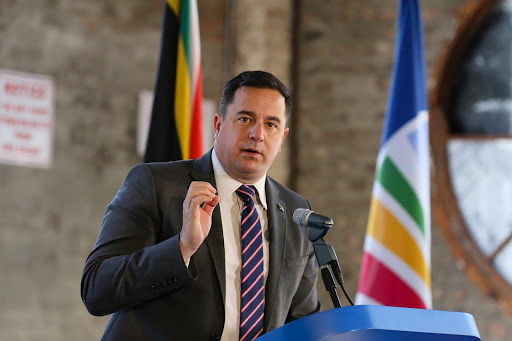 DA leader John Steenhuisen has made a call for President Cyril Ramaphosa to provide an end date for all lockdown restrictions
Image: Picture: WERNER HILLS

DA leader John Steenhuisen says the party has recovered from the 2019 crisis when its erstwhile leader Mmusi Maimane quit months after a disastrous election performance.

Steenhuisen, speaking at a media briefing ahead of the party’s manifesto launch on  Saturday, said the DA was able to mount a competitive campaign ahead of the November 1 municipal polls despite the disruptions of two years ago.

While he expressed confidence in the party's recovery, Steenhuisen wouldn't divulge what the DA's internal polling indicated ahead of the upcoming elections.

Daron Mann talks to the devastated mother of 5-month-old Ezam Makhabane and the aunt of 6-month-old Kwahlelwa Ndongeni, the two babies who died in an East London daycare centre on the same day, about the trauma and uncertainty their families are facing. The parents are yet to find out the truth about what transpired and took their babies' lives. The babies died within hours of each other a month ago. Autopsy reports are awaited to ascertain the causes of their deaths.

“But I am very comfortable with the recovery the DA has made in a very difficult situation. I think I'm very proud of the fact that we've been able to turn things around and we are competitive in this election,” he said.

“There are very few parties in the world that survive a leader walking out on the job and turning their back on people that put them in that position,” he added.

Maimane quit the DA in October 2019 saying the party was no longer the vehicle best suited to take forward the vision of building one SA for all. This was shortly after an organisational review panel concluded he was indecisive and blamed him for the DA's electoral decline in May that year.

Seven disgruntled ANC members and councillor hopefuls,  including current councillors, went to court on Tuesday claiming their names had been ...
Politics
10 months ago
LOCAL ELECTIONS | Check your voter registration online

Steenhuisen said the party will focus on winning small towns in the elections. In previous elections, the party paid more attention to winning metropolitan municipalities.

He is concerned, however, that the smaller parties contesting elections may hamper the DA's chances of winning, which may work in favour of the ANC.

“Yes, small parties can affect the DA. Take for instance a ward where the DA has a small majority but is able to hang on to that seat, and then you have smaller parties who are not interested in taking on the ANC but want to be an opposition to the opposition.”

He said such parties did not go after the ANC but tried to weaken the DA. Both the smaller party and the DA would not get enough votes to win the ward, and the ANC or the EFF, the DA's toughest competitors, would win in the end.

“People must be careful and not play with fire in this election [by] voting for a party that has no chance of winning and will end up with two councillors that sit at the back of a hall for the entire five years.”

He said such parties are not able to fight for their voters, which is the main aim of an opposition party, especially in the local government sphere.