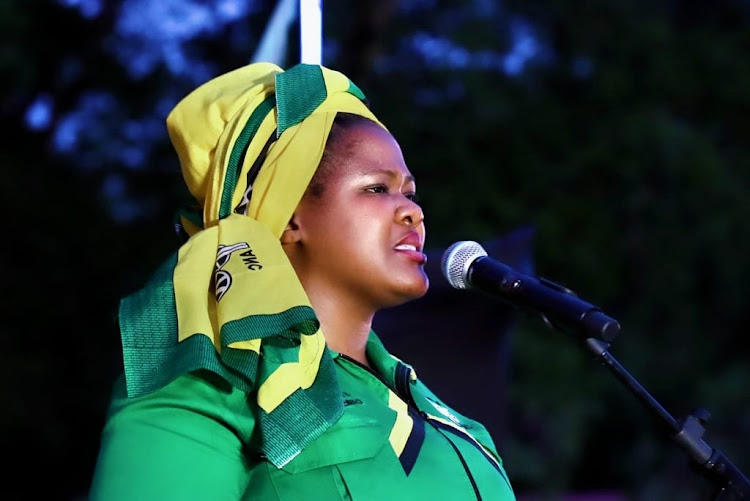 Nonceba Mhlauli is the convener of the ANCYL NTT. The structure has commended their mother body for rejecting EFF advances towards getting to govern Tshwane.
Image: SUPPLIED

The ANCYL national task team has called out EFF leader Julius Malema for apparently telling “lies” to South Africans about the real reasons coalition talks between the red berets and the ANC collapsed.

Addressing a media briefing on Monday morning at the EFF headquarters in Johannesburg, Malema said the ANC had tried to trick the EFF into talks that were only concerned about horse trading with positions and not services at the hung municipalities.

But according to a strongly worded statement by the ANCYL national task team (NTT), Malema's utterance were misleading as it was the EFF that proposed that it be given Tshwane in exchange for Ekurhuleni going to the ANC.

This is a proposal that Malema has openly spoken about in public, including at his Monday briefing.

The ANCYL charged that it was the ANC's rejection of Malema's quest to have EFF govern Tshwane that set him on a war path with the ANC as he vowed that his party would not entertain any talk with its Luthuli House counterparts on coalitions.

As coalition negotiations continue, EFF leader Julius Malema said the party was willing to swallow its pride and work with the ANC to achieve its ...
Politics
2 weeks ago

The ANCYL said it was disturbed that the EFF was determined to govern Tshwane with a mere 10% of the vote, despite the ANC and the DA getting more than 30% each in the recent local government polls.

Malema was doing this, they said, because he was an opportunist who was determined to get his claws into the cookie jar at all cost.

“South Africans must not be deceived by Malema’s unwarranted attack on the ANC as it is an expression of frustration after his opportunism and uncontrollable appetite to put his dirty paws in the cookie jar was not satisfied through these negotiations,” reads the ANCYL statement.

“He also wanted to use the lousy 23 seats his cult got in the city of Tshwane to govern a council with a total of 214 councillors while the most seats went to the ANC followed by the DA.

“This is a clear indication that the scoundrel’s opportunism knows no limits and respects no laws.”

While ideological differences are clear, party leaders Julius Malema and John Steenhuisen sang a similar tune, decrying the possibility of any ...
Politics
1 week ago

The ANCYL went on to accused Malema of a desperate attempt to strong-arm the ANC into agreeing to a policy shift on matters that have nothing to do with local government.

This after the EFF demanded among other things that the ANC agree to the cancellation of student debt, nationalisation of the Reserve Bank and expropriation of land without compensation.

Malema had argued that the demands had everything to do with national issues.

According to him, if coalitions have nothing to do with national issues, they ought to not be negotiated among national leaders of political parties.

But the ANCYL believes Malema is leading a cult in the EFF that he uses "looking for cheese, ready to further line his pockets”.

The young lions further commended their parent body for rejecting EFF advances, especially its proposal to be given full control of the country's capital city.

“We urge South Africans not to be moved by the theatrics of the cult especially their lead actor, Julius Malema, who enjoys hearing his own voice in press briefings and seeing the other actors nodding to his hogwash.

“The leadership of the ANC is doing its best to enter into coalitions with reasonable political parties which are not built on a cult around a scoundrel, but on a commitment to social justice.”