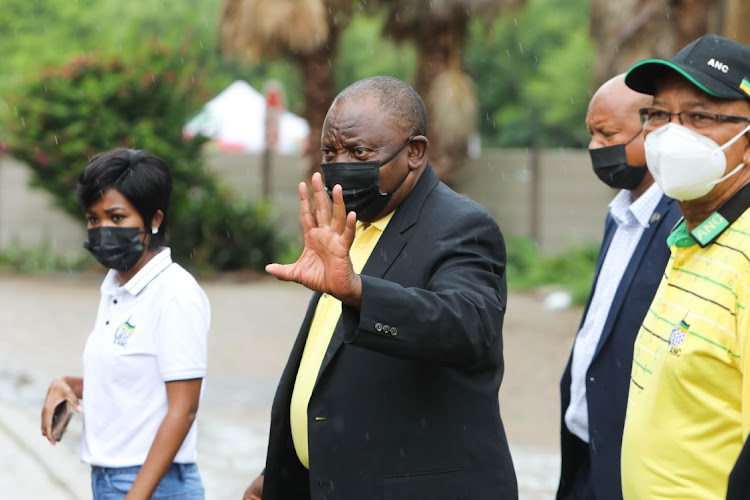 Cyril Ramaphosa waves to supporters at Mokopane, Limpopo, on Thursday at a community outreach event with traditional leaders, traditional health practitioners and faith-based organisations in the build-up to the January 8 statement.
Image: ALAISTER RUSSELL/ THE SUNDAY TIMES

President Cyril Ramaphosa has defined the absence of an active ANC Youth League, especially during elections, as an embarrassment — and encouraged league members to “rise from ashes”.

“As you head off for your conference, go and elect leaders who will advocate the interests of the youth, not those who are looking after their self interests. You must never go back to the situation that it's been over the past few years,” said Ramaphosa.

The ANC president told league members in Polokwane on Friday that as they rebuild their branches towards a national elective conference, they must make sure their membership is fit for purpose.

You must not become paper branches that exist on social media where you only hurl insults at each other and attack each other. That must come to an end

“You must not become paper branches that exist on social media where you only hurl insults at each other and attack each other. That must come to an end. You must build branches that speak to the issues of young people,” he said.

Ramaphosa was delivering the Peter Mokaba Memorial Lecture from the top of a van after disagreements within the youth league over accreditation for the event. This, however, did not dampen his spirit.

He said an ideal youth league should be able to bring solutions to many social issues that plague the youth of SA, mainly unemployment, and must be one that attracts “highly educated young people,  entrepreneurs and aspirant industrialists within its ranks because they are the future leaders of this country”.

In addition, Ramaphosa asked young people to lead the charge for the development of policies to advance radical socioeconomic transformation.

“We won political freedom which many sacrificed their lives for and now we are called upon to enter a new phase of our struggle in which all efforts and energy are directed towards achievement of economic emancipation.

“We look to you as the ANC Youth League to enrich our understanding of radical socioeconomic transformation and to advance the policies that will free our young people from poverty,” Ramaphosa explained.

He praised ANCYL members for bringing to him proposals dealing with initiatives that focus on funding for youth-owned businesses, including the expansion of skills for young people.

While he admitted that youth unemployment remains the biggest barrier in the fight against poverty, Ramaphosa said the government was not folding its arms.

“It's not like we are sitting and doing nothing about the plight of young people, we know that we need to do more but initiatives are under way.

He, however, raised concerns about the rate at which young people drop out of basic education without completing their matric, adding that most people (60%) who applied for the R350 grant did not finish Grade 12.

Cyril Ramaphosa on Thursday walked out of what was supposed to be a memorial lecture in memory of Lilian Ngoyi.
Politics
1 week ago

Ramaphosa called on the youth league to be present not only in the party but in all spaces occupied by young people and  “do everything possible to ensure that opportunities offered to young people are not defined by race, gender, class or religion”.