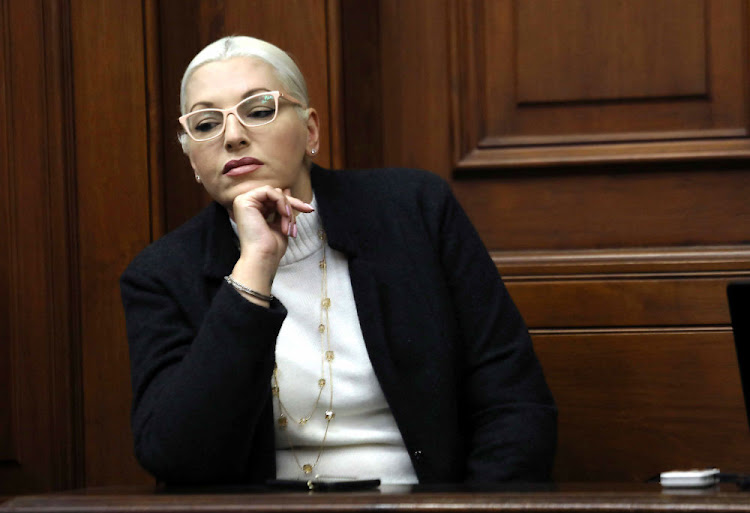 DA chief whip Natasha Mazzone says it has never been the case that a board member speaking openly to Scopa has been asked to leave based on the fact that the Scopa chair did not like the response. File photo.
Image: Esa Alexander

The DA wants parliament to suspend Mkhuleko Hlengwa, chair of the standing committee on public accounts after his heated exchange with Eskom board member Busisiwe Mavuso on Friday.

The party is accusing Hlengwa of bias and being rude to Mavuso.

DA chief whip Natasha Mazzone has written to National Assembly speaker Nosiviwe Mapisa-Nqakula asking for an urgent investigation into Hlengwa’s conduct and for parliament to take action against him. She wants parliament to apologise to Mavuso for being thrown out of a meeting where she was asked to give an honest opinion, Hlengwa to be reported to the powers & privileges committee for a full investigation into his behaviour towards Mavuso, that the National Assembly chairperson responsible for oversight, Cedric Frolick, investigate whether any meeting occurred between Hlengwa and any ANC member before Friday's Scopa meeting  and that Hlengwa publicly apologise during the next sitting of parliament for his actions against Mavuso.

Mazzone said Hlengwa should be suspended as Scopa chairperson until the powers  & privileges committee has finalised its hearing against him.  Hlengwa's ruling that Mavuso leave the Scopa meeting should be referred to the rules committee for further consideration, she said.

Eskom board member Busisiwe Mavuso excused herself after she had a heated interaction with the chairperson of parliament's standing committee on ...
News
1 month ago

“As I am sure you are now aware, a most unfortunate and quite frankly, unacceptable meeting took place with the board of Eskom on Friday 22 April 2022. The meeting soon deteriorated into an embarrassing exchange between an overwhelmed and biased committee chairperson, Mr Mkhuleko Hlengwa MP, and Eskom board member Ms Busisiwe Mavuso,” wrote Mazzone on Monday.

She said board members enjoy the right to speak openly, freely and should tell the truth when they are called to account before Scopa.

“It has never been the case that a board member telling the truth or speaking openly has been asked to leave, based on the fact that the Scopa chair did not like the response.

“Ms Mavuso gave an honest account of her findings and experiences with Eskom and was treated with complete rudeness and disdain by Mr Hlengwa,” she said.

Mazzone said Mavuso was made to leave parliament in an unprecedented fashion for giving a “truthful account, which is her completely honest opinion”.

“The facts are quite simple: Scopa is there to hear all sides of the story, whether the chair (or any other member of the committee) likes the answers or not. I would go so far as to say the extreme reaction of the Scopa chair would indicate he was taking direct instruction from the ANC on the matter and was completely in favour of the ANC in his actions,” said Mazzone.

A heated interaction ensued between Hlengwa and Mavuso on Friday after Mavuso said the Eskom board and CEO Andre de Ruyter will not be the “fall guy” for the mess the power utility is in and which she said was created by the ANC-led government.

“The reality of the matter is that this is not our mess,” she said.