Olympic 200m breaststroke golden girl Tatjana Schoenmaker arrived back in the country on Monday afternoon and flashed the biggest of smiles as she emerged from the international arrivals terminal at OR Tambo International Airport.

The University of Pretoria student also won the silver medal in the 100m breaststroke. 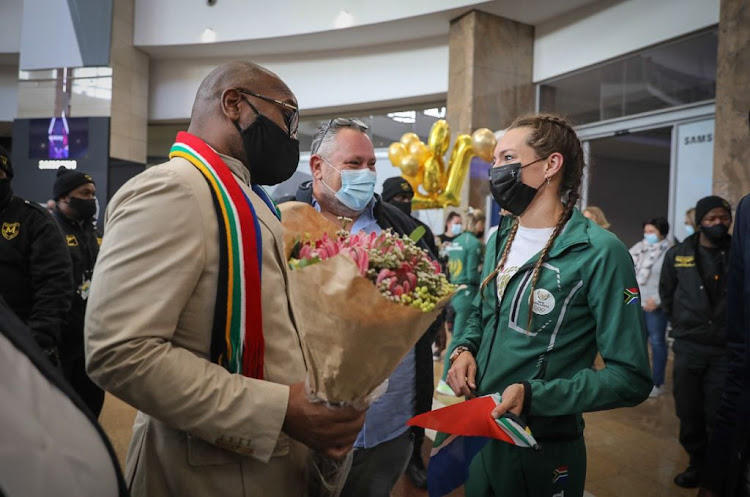 SA's Olympic golden girl Tatjana Schoenmaker is greeted by her father, Rene, and sports minister Nathi Mthethwa as she arrives at OR Tambo International Airport from the Olympic Games in Tokyo on Monday August 2.
Image: Sebabatso Mosamo

#TatjanaSchoenmaker mom Rene and dad Renske thanking everyone for the support and love.
Tatjana will emerge from the international arrivals terminal doors any moment. pic.twitter.com/zedEIehsqi

Schoenmaker waved to those who had come to welcome her back home and she was accompanied by her coach Rocco Meiring. She was received by minister of sports, arts and culture Nathi Mthethwa, Sascoc vice-president Lwandile Simelane and parents Rene and Renske at the gates.

The swimming sensation said she was glad she could put smiles on South African’s faces and uplift them during a difficult pandemic period, and the civil unrest that had Gauteng and KwaZulu-Natal in a grip and left hundreds dead.

“I feel like it had not sunk in, but now it has after seeing all these people. It just makes the moment really special,” said Schoenmaker. “If my achievement can give that little bit of hope to someone out there during these difficult times, if that is everything I needed to do, then I have achieved so much.”

Coach Meiring said the swimmer’s achievement was just reward for the work put in over the past five years. He said he had never seen a more dedicated athlete in the three decades he has been coaching.

#TatjanaSchoenmaker's boyfriend is here with us at international arrivals. He says the first thing he'll do when he sees Tatjana is give her a warm hug.
Our golden girl, world record breaker will be here any moment, what a way to kick start women's month. pic.twitter.com/aFwHlET6Tx

“I don’t think I’ve ever put anybody through hell like I did with Tatjana in my 30 years of coaching,” said the ecstatic coach. “It has been five years of hell for her and I felt terrible watching her go through that.

“The standard was very high and people are going to [see her get] even better and faster in Paris [at the next Olympic Games].”

Meiring described his swimming sensation as a soldier of war, and added that he only had to do so much before Schoenmaker’s talent eventually saw her through.

“You can coach somebody up to a certain point. She has  been blessed by God with exceptional talent and ability.”

Sports minister Mthethwa showered Schoenmaker with praise and thanked the swimmer for carrying the hopes of the nation on her small shoulders.

“Your dad [Rene] told me that they are busy with the braai now and they are ready waiting for you at home,” Mthethwa said. “In these troubled times for our nation, you rose to the occasion. The whole of government is congratulating you and your family.

“This is not just an ordinary win. You have set the standard and record for the whole world. [Everybody]  will be following in your footsteps.”

Sascoc vice-president Lwandile Simelane said Schoenmaker will be celebrated by generations to come.

“We will celebrate you forever. It is an honour for us as Sascoc to receive you.”

Swimming SA (SSA) president Allan Fritz said the sport — a code that has always delivered the golden goods for Team SA — needs more sponsors to come on board to help it get more medals in Paris in three years' time.

“We would like to make a plea. We need to put weight behind our athletes. We need more sponsors from corporate SA to make the athletes' dreams come true.”

Schoenmaker has already received a call from President Cyril Ramaphosa, who phoned the athlete while she was still in Tokyo to congratulate her.