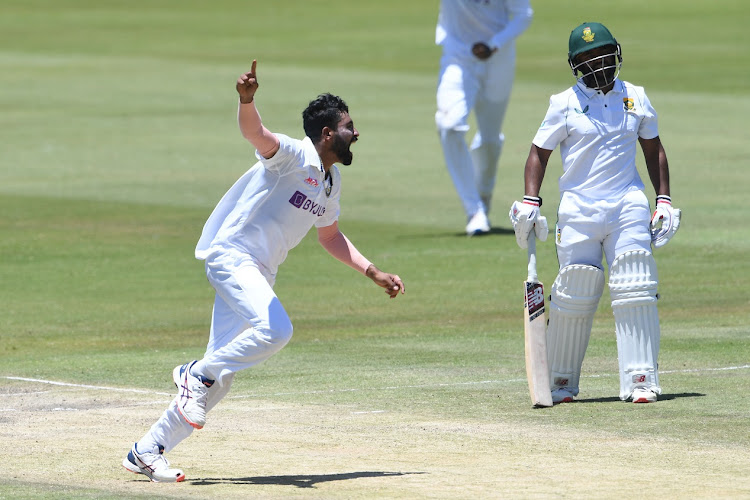 Mohammed Siraj of India celebrates the wicket of Quinton de Kock of the Proteas on day 5 of the first Test at SuperSport Park in Centurion on December 30 2021.
Image: Lee Warren/Gallo Images

India need three wickets to win the Boxing Day Test in Centurion and take a 1-0 lead against SA in the three-match series that will move to Johannesburg and Cape Town in the new year.

SA went into the final day needing 211 runs to get to their target of 305 for a win but it looks unlikely they will get there as they went to lunch on Thursday sitting on 182/7 and still 123 runs behind.

The Proteas will resume after lunch with Marco Jansen on five runs and Temba Bavuma fighting on 34 and with the rest of the tail in the form of Kagiso Rabada and Lungi Ngidi still to come.

India are closing in on victory against SA in the Boxing Day Test at SuperSport Park in Centurion.
Sport
4 weeks ago

The first wicket to fall on day five was that of Proteas skipper and opener Elgar when he was trapped in front by the explosive Jasprit Bumrah having scored a defiant 77.

With the important scalp of Elgar, Bumrah became the fastest Indian bowler to take 100 Test wickets away from home, taking only 22 matches to do so.

Elgar was involved in partnerships of 33 with Keegan Petersen, 40 with Rassie van der Dussen, 20 with Keshav Maharaj and 36 with Bavuma.

He also rode his luck because he was dropped by Mohammed Shami on 63 during the early exchanges but overs later he did not survive the review as he was trapped in front of the stumps.

SA’s problems deepened when Quinton de Kock was beaten by Siraj when he crushed his stumps and Mulder (1) was removed by Mohammed Shami, as India took more crucial steps towards winning the Test match.