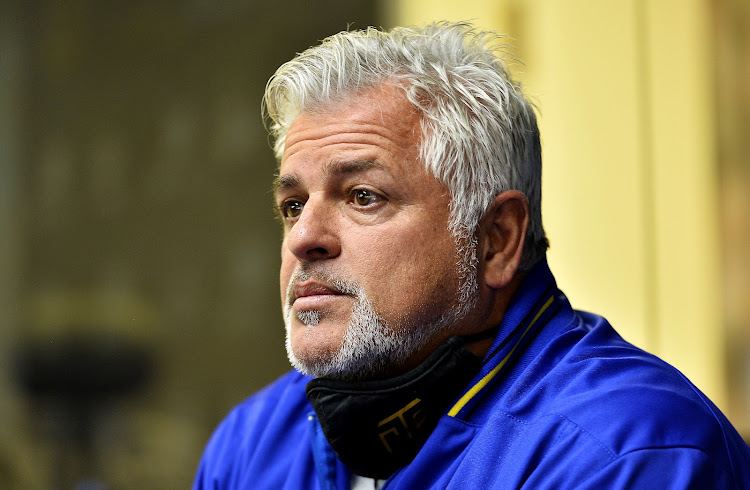 Cape Town City boss John Comitis is yet to decide if his team will play Kaizer Chiefs on Saturday.
Image: Ashley Vlotman/Gallo Images

Cape Town City are still pondering whether to honour their rescheduled DStv Premiership fixture against Kaizer Chiefs at FNB Stadium on Saturday.

The match was supposed to have been played in December, but Amakhosi failed to honour the fixture due to a Covid-19 outbreak in Naturena at the time.

Chiefs applied for their games in December to be postponed but that was rejected by the PSL's football department and later the executive committee (exco).

Having had no correspondence directing them otherwise, City travelled to Johannesburg for the game but found the gates to the FNB Stadium locked.

Chiefs took the PSL exco's decision to an arbitration at the SA Football Association where advocate Nazeer Cassim SC ruled in favour of the club and ordered the match to be played. The arbitration decision has been taken by the PSL on review to the South Gauteng High Court and will be heard on May 10.

City chairperson John Comitis, though, has declared in the media that his club may boycott Saturday's rescheduled fixture, a statement that landed the Citizens' owner in hot water as he will face a PSL disciplinary hearing for it on Friday.

Cape Town City's apparent refusal to play their DStv Premiership fixture against Kaizer Chiefs is threatening to delay the end of the current Premier ...
Sport
1 month ago

City media officer Julian Bailey could not say if the team would be travelling for a second time to FNB Stadium when contacted on Tuesday.

Bailey said Comitis, who is currently overseas, and City general manager Andreas Christodoulou were still consulting on the matter.

“I don’t have the answer at the moment with regards to that match — I’m still waiting for the chairman and general manager as they are busy about it,” Bailey said.

“At the moment we are preparing to play Mamelodi Sundowns tomorrow [Wednesday night].”

PSL prosecutor Zola Majavu clarified on Thursday that Comitis will appear before a DC.

“John Comitis will appear before the DC this Friday to answer charges of bringing the league into disrepute based on some media utterances attributable to him, which he subsequently confirmed as being true and accurate,” Majavu said.

Chiefs meet Lamontville Golden Arrows on Wednesday in another fixture that they could not honour in December, for the same reason. Cassim also ordered that the Arrows match be played.

Amakhosi against Arrows is at Princess Magogo Stadium in Durban (3pm).