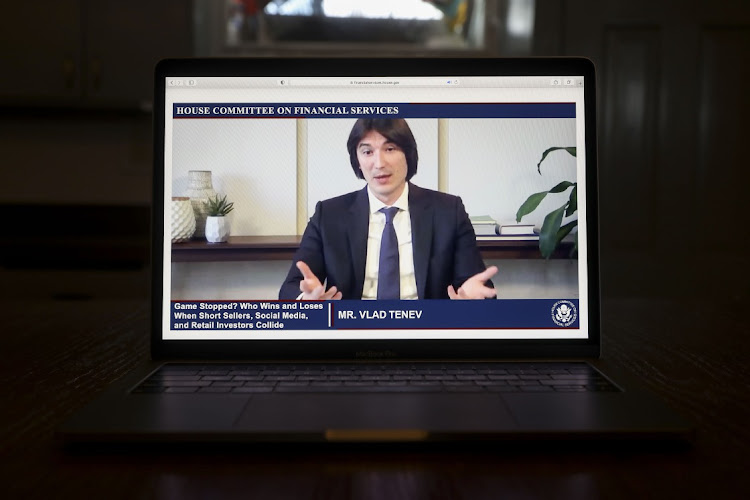 Robinhood CEO Vlad Tenev speaks virtually during a hearing on a laptop computer, in Tiskilwa, Illinois, the US, on February 18 2021.
Image: DANIEL ACKER

Wall Street hedge fund managers, the CEOs of Robinhood and Reddit, and a YouTube streamer known as Roaring Kitty were grilled on Thursday by US legislators about the Reddit-fuelled rally in shares of GameStop.

Some of Wall Street's most powerful players, including billionaire Republican donor and Citadel CEO Ken Griffin, defended their businesses as legislators probed how Reddit users trading on retail platforms squeezed hedge funds that had bet against shares of the video game retailer and other companies.

Anatomy of a disinformation campaign: The who, what and why of deliberate falsehoods on Twitter

Since 2018, SA has featured on a growing list of countries where social media is used to spread disinformation.
News
3 months ago

The five men have been at the centre of the saga, which roiled Wall Street in January, prompting probes by several federal and state agencies.

Representative Maxine Waters, the committee chair, is a critic of Wall Street, while Republicans on the panel also sought to burnish their consumer-protection credentials, making for a fiery virtual hearing. Tenev and Griffin faced particularly tough questions from both sides during an often chaotic discussion featuring echoes, feedback and background noise.

Waters, who in January called hedge funds “unethical”, bore down on Tenev and Griffin, frequently talking over the executives and cutting them off.

In prepared opening testimony, the witnesses generally acknowledged the GameStop saga was unprecedented, but they all said there was no foul play on their part.

The Reddit rally drove huge volatility in GameStop and other shares, prompting the post-trade “clearing” houses that guarantee trades to call for billions of dollars in extra collateral from Robinhood and other retail trading platforms.

I'm sorry for what happened. I apologise. I'm not going to say that Robinhood did everything perfect

In response, many suspended buying in the affected stocks on January 28. Legislators from both parties were outraged and questioned if the trading platforms were siding with hedge funds over retail investors.

Tenev expressed regret that Robinhood's actions upset customers but said no hedge funds influenced its decision and the situation would have been “significantly worse” if it had not suspended buying.

“I'm sorry for what happened. I apologise. I'm not going to say that Robinhood did everything perfect,” he said, adding that the young fintech company would not repeat its mistakes.

New York-based hedge fund Melvin Capital, which had bet GameStop's shares would tumble, suffered huge losses as the stock soared leading up to Jan. 28. Citadel made a $2 billion investment in Melvin on Jan. 25.

Lawmakers quizzed Robinhood's commercial arrangements with market makers to which it routes orders, as well as whether that “payment for order flow” model hurts customers.

Griffin, majority owner of Citadel Securities, a Robinhood market maker, was castigated by Democratic Representative Brad Sherman for evading his question about whether market-makers provide the same prices to all brokers.

Griffin maintained Citadel Securities, which executes roughly 47% of all US-listed retail volume, had worked for years to help give consumers “a better price”.

All parties have denied any attempt by Citadel or Citadel Securities to influence Robinhood's policies.

Gill and Huffman fielded fewer questions, but were asked about the role of social media platforms in potential market manipulation.

We spend a lot of time at Reddit ensuring the authenticity of our platform. ... And in this specific case, we did not see any signs of manipulation

“We spend a lot of time at Reddit ensuring the authenticity of our platform. ... And in this specific case, we did not see any signs of manipulation,” Huffman said.

Gill sat in a red videogaming chair from which he recorded many of his podcasts extolling GameStop. Behind him was displayed a poster of a kitten with the caption “Hang in there!", an apparent message to fellow GameStop investors, many of whom face deep losses after buying at the height of the rally.

“I am just an individual whose investment in GameStop and posts on social media were based upon my own research and analysis,” he said, adding he still liked the stock.

At times, he and Plotkin offered their competing investment theses on GameStop, with Plotkin arguing that due to the rise of digital downloads, the video game bricks-and-mortar business model has “structural challenges”.