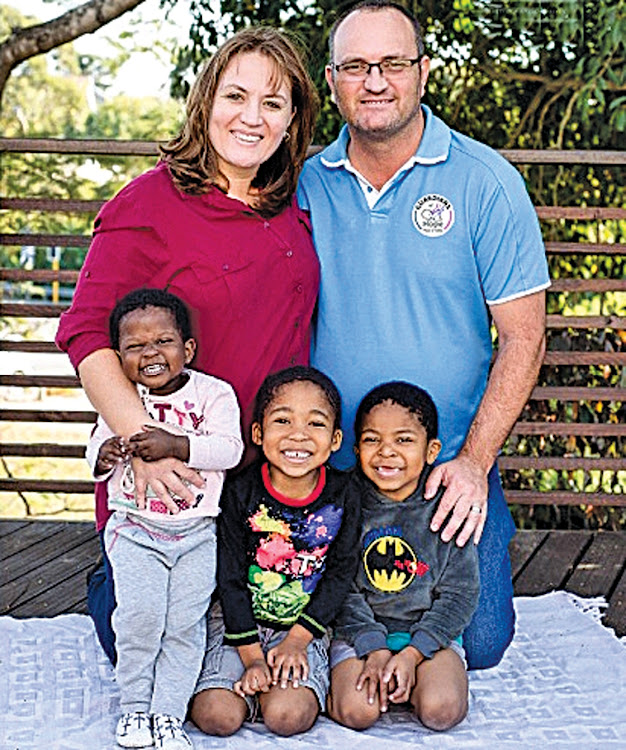 LOVE AND HOPE: Elaine Brenkman , left, husband, Dirk, and some of the children under their loving care at the Guardians of Hope Place of Safety, which cares for abandoned, destitute babies who are given up for adoption. Each child is loved, nurtured, and prayed over daily. Elaine was a 2017 Local Heroes finalist.
Image: SUPPLIED

After a rigorous judging process, the 12 good Samaritans who have gone above and beyond the call of duty for their communities and were selected as 2019 Local Hero finalists will be revealed at a gala event on Thursday evening.

As part of their prize in 2019, the 12 finalists will receive a R20,000 cash prize for their organisations, projects and initiatives. Over the last five years, the Local Heroes campaign has celebrated and honoured the kindness, selflessness and extraordinary acts of 48 men and women.

The event aims to showcase the good deeds of new local heroes annually, and it has kept sponsors, judges and even former local heroes coming back year after year to be wowed by the generosity of others.

Guardians of Hope founder and a 2017 Local Heroes finalist Elaine Brenkman said: “Just seeing how many people there are out there who are doing so much good, is so inspiring. It gives all of us that extra ‘va-va voom’ to do a little more and to care a little more.”

She said the event provided one of the only platforms where ordinary philanthropists, who were not usually seen and celebrated, were made to feel appreciated and receive the recognition they deserved.

“I honestly think it’s the best event of the year and I really wouldn’t miss it for the world. We [Guardians of Hope] gained so much awareness and support after being Local Hero finalists. The campaign and the event really made a huge impact,” said Brenkman.

12 Local Hero finalists set to be honoured at special ceremony

The time has arrived to celebrate our local heroes. A gala dinner will be held at the East London ICC on October 31, at which 12 finalists in the ...
Local Heroes
2 years ago

“It’s an amazing event and for us it's about networking and seeing the wonderful things others are doing out there. It gives us a chance to offer our services to other organisations and form friendships with others we may need in the future,” said Peake.

Johnson & Johnson representative Michelle du Preez said that giving back to the community was the company’s passion and the main reason why Johnson & Johnson had been the campaign’s naming rights sponsor for the last five years.

Being part of the judging panel over the last few years, Du Preez said each year presented difficulties as there were many deserving heroes. While there is a strict judging criteria, Du Preez said the main thing she looked for in a hero was self-sacrifice.

“There are a lot of people doing great things, but I was looking for uniqueness, for a person who sacrifices something to help others, someone who was giving their own time or money. For me, that was a key factor in the judging process,” said Du Preez.

Daily Dispatch general manager Ryan Megaw said he always found the judging process to be equally challenging. “Sometimes I wish we could honour everyone making a difference, because choosing the 12 finalists is always the most difficult part,” said Megaw.

“What amazes me every year is the amount of inspiring stories we find. There are always people trying to make a difference.”

He said that each year the Daily Dispatch wrote between 50 to 60 stories showcasing the Local Hero nominees.

“This is the fifth year of Local Heroes and we’ve essentially honoured at least 250 people in our weekly stories. It’s astounding to look back and realise how many inspirational people there are out there.

“As a newspaper, it is so important for us to be involved in the local community and continue to highlight the people who are making a massive difference,” said Megaw.

The 2019 event will see MC Bongani Bingwa return to the Local Heroes stage as the host after presenting the very first Local Heroes dinner in 2015.

A KFC Heroes’ Hero Award has also been introduced in celebration of the campaign’s fifth anniversary this year. The winner, who will be awarded a R50,000 cash prize from KFC, will be announced at the event on Thursday evening alongside the 2019 Local Hero finalists.