I was targeted because I had information on ANC spies, Jacob Zuma says 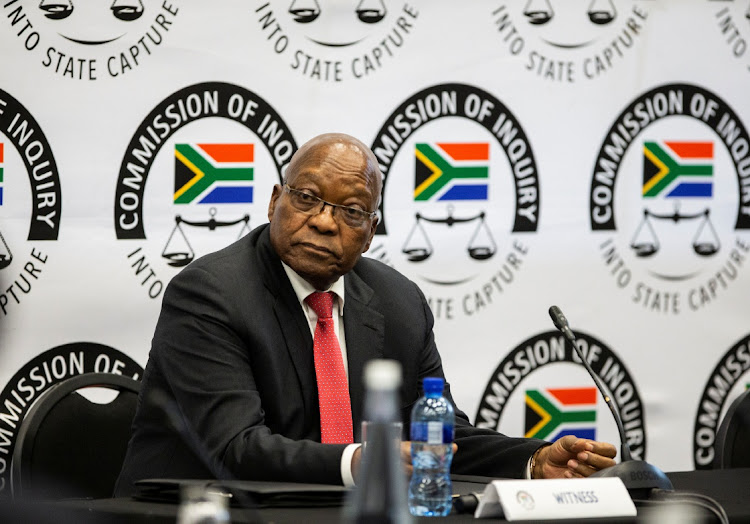 Former president Jacob Zuma began his evidence at the state capture inquiry on Monday by hitting back at how he had “been vilified” and alleged to be the “king of the corrupt” for a decade.

He said he believed “this commission was really created to have me coming here, and perhaps to find things to have on me”.

Zuma has asked to give his own address before he is asked questions by evidence leaders, following the testimony of nine witnesses — including current and former ministers Pravin Gordhan, Fikile Mbalula, Barbara Hogan and Ngoako Ramatlhodi — which the inquiry believes implicates him in alleged state capture.

“There has been a drive to remove me from the scene, a wish that I should disappear, and I will explain where it comes from …and it arises perhaps from my work in the ANC and also because of who I am. This conspiracy against me has … come in different forms.”

Former president Jacob Zuma is expected to appear for the first time before the commission of inquiry into state capture on Monday.
News
2 years ago

He added that part of this conspiracy manifested in accusations that he “dodged things” — an apparent reference to his oft-maligned “Stalingrad” strategy of litigation in response to the corruption charges against him. This was a term used by his former advocate, Kemp J Kemp, to describe how the former president intended to fight his prosecution “in every room, in every street, in every house”.

Zuma says he has been the subject of “character assassination” since the 1990s, and suggests that this is because he has “information” on certain spies within the ANC that had been identified as potential leaders of the governing party.

Earlier, Zuma’s advocate, Muzi Sikhakhane, said the former president's legal team had no idea what he would say to the commission.

He told commission chair deputy chief justice Raymond Zondo that Zuma “may mention you” when he gave evidence, and suggested that he may “out” certain unnamed people for certain unnamed crimes.

'I'm alleged to be the king of corrupt people' - Zuma

“I have been vilified, alleged to be the king of corrupt people” were former president Jacob Zuma’s first words at the state capture commission of ...
News
2 years ago

“An injustice may happen because we would have liked to prepare him,” Sikhakhane said after stating that Zuma’s lawyers sought the questions he would face precisely to ensure that those he named could be notified.

Inquiry evidence leader Paul Pretorius said he did not understand this submission, prompting Sikhakhane to hit back at what he described as Pretorius’s “condescension”.

Sikhakhane said that from the start of the inquiry Zuma had said he was willing to co-operate with its processes, and hit out at “propaganda” that suggested that he was not willing to give evidence.

Zuma has, however, made it clear that he had “problems” with then public protector Thuli Madonsela’s “State of Capture” investigation, which birthed the Zondo Commission, and would vocalise these concerns in his address.