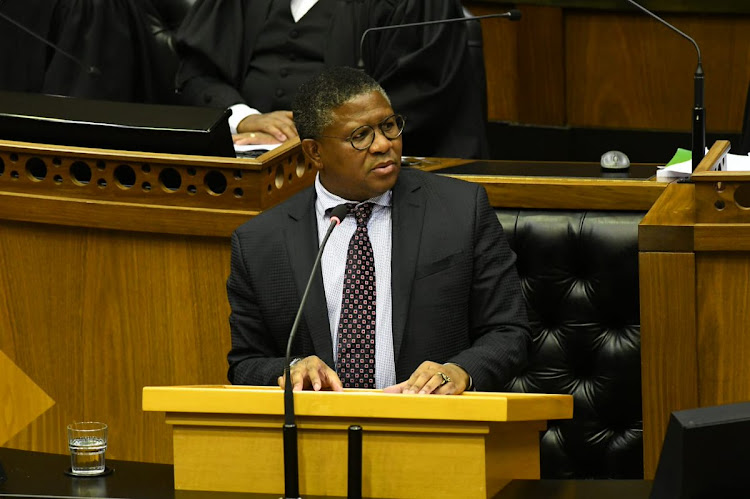 Fikile Mbalula told MPs the ANC did not hide its mistakes: "We stumble and rise. We still have dreams of a nation that is a beacon of prosperity."
Image: Parliament of RSA via Twitter

DA chief whip John Steenhuisen has told President Cyril Ramaphosa to stop "tip-toeing" around ANC secretary-general Ace Magashule, saying he was betraying the dreams of the nation by doing so.

Speaking as a sweeper for the DA during the state of the nation address (Sona) debate on Tuesday night, Steenhuisen said Ramaphosa could not sit and watch while Magashule populated key parliamentary structures with members of his faction, who were facing serious allegations of wrongdoing for their actions as ministers under former president Jacob Zuma.

"The more you delay the deep reforms, the further the economy will drift away. The longer you pander to the corrupt and rotten in your party, the more the doubts are going to pile up," said Steenhuisen before warning Ramaphosa about Magashule, who is also the controversial ex-premier of the Free State.

Ace played his parliamentary jokers despite opposition from ANC leadership

"Mr President heed this warning. Ace Magashule is like a vulture that has flown in fresh from picking dry the carcass of the Free State administration. He is moving against you Mr President, he has deployed his minions into key positions in this house to weaken you, and just like a vulture, he is perched at Luthuli House waiting for that first carrion whiff of weakness that will signal the kill."

Steenhuisen was referring to Magashule's announcement last week that controversial ANC figures seen as his allies and anti-Ramaphosa, such as Bongani Bongo, Faith Muthambi, Mosebenzi Zwane, Supra Mahumapelo, had been appointed as chairpersons of various parliamentary portfolio committees.

Steenhuisen said even transport minister Fikile Mbalula, who was due to speak after him, had previously warned that Magashule would "finish what remained" of the ANC.

"The longer you remain agnostic to the Magashule manoeuvring, and the more you tiptoe around Ace, calling him 'My Boss' and telling us that 'without him you are nothing', the harder you stamp on the dreams of our citizens," he said.

Time for president to get down and dirty

“ … quantity easing …”, said ANC secretary-general Ace Magashule. The markets were spooked, the rand dropped and the cracks within the ruling party ...
News
3 years ago

When his turn to sweep for the ANC as the last speaker in the debate arrived, Mbalula did not respond to Steenhuisen.

Instead Mbalula focused on transport issues, saying the troubled state rail agency Prasa would be turned around under the Ramaphosa-led government.

Mbalula, who was accused of not "sweeping properly" by opposition MPs, said they had been spewing "hot air" after they spent Tuesday accusing Ramaphosa of delivering nothing but hollow dreams in his Sona.

Mbalula accused DA leader Mmusi Maimane of "Thatcherism" after he had earlier called for the privatisation of poor-performing state-owned companies and the relaxation of labour laws.

Truth was the first casualty in the extremely damaging spat over the SA Reserve Bank last week.
News
3 years ago

"Those are not reforms, those are deforms. He has a pocketful of seven deforms, deform health care, deform workers' rights, deform public education, deform minimum wage. Mr President, those are not reforms but deforms and are affirmations of capitalists and a cultural majority the DA truly represents," he said.

Mbalula said the ANC had "never claimed to be perfect".

"We've always owned up to our mistakes, we never hide them. We stumble and rise. We still have dreams of a nation that is a beacon of prosperity."

Ramaphosa was scheduled to respond to the debate at 2pm on Wednesday.