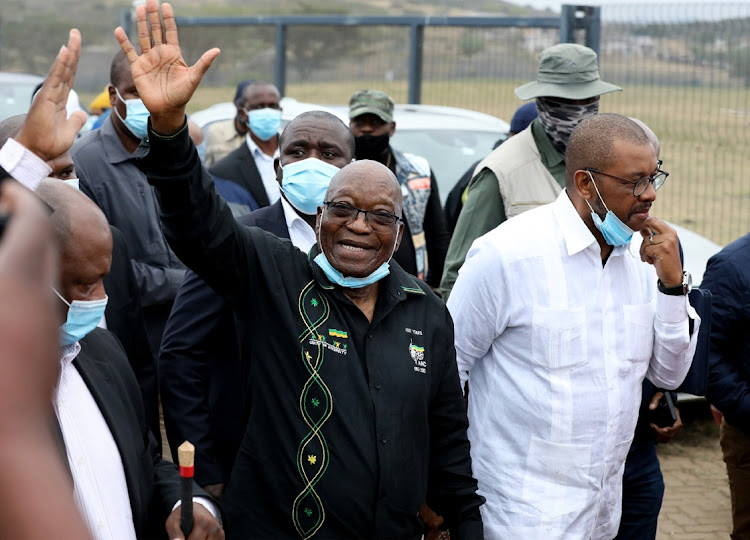 When Jacob Zuma bowed to pressure to quit as South Africa's president in 2018, he ranted to the state broadcaster for an hour about his treatment by the party he had served since his teenage years.

Besieged by sleaze and corruption scandals throughout his nine years in power from 2009, he said it was “unfair” the African National Congress (ANC) had told him to resign, mainly because his comrades had not followed proper party procedure.

South Africans who suffered economic stagnation and national embarrassment under Zuma saw it as further evidence of a leader unable to look beyond the Byzantine inner workings of Africa's oldest liberation movement to consider the greater good of Nelson Mandela's “Rainbow Nation”.

Former president Jacob Zuma has officially been jailed. The correctional services department confirmed at 1.50am on Thursday that Zuma had “been ...
News
11 months ago

Zuma agreed to hand himself over to serve 15 months in jail for contempt of court, his foundation said on Wednesday, having been sentenced for disobeying a constitutional court order to give evidence at the inquiry into allegations of high-level corruption under his leadership.

At 79, Zuma, an anti-apartheid veteran and Zulu traditionalist, still commands a loyal following in his home province of KwaZulu-Natal and among some disaffected members of the ANC.

But he is also facing corruption charges relating to a $2 billion arms deal with French defence firm Thales in 1999, when he was deputy president.

The charges were reinstated in March 2018, a month after the end of a presidency marked by corruption allegations and sovereign credit rating downgrades.

Zuma rejects all allegations as a politically motivated witch-hunt. The case is a rare example of an African judicial system seeking to prosecute a former leader for wrongdoing.

Police ministry spokesperson Lirandzu Themba said minister Bheki Cele would not be in Nkandla on Wednesday, the deadline by which police were meant ...
News
11 months ago

It was Zuma's mastery of the ANC's internal dynamics that enabled him to survive for so long, but his political influence had been waning since then-Deputy President Cyril Ramaphosa replaced him as the ruling party's leader in December 2017.

“It's us who got South Africa into this mess by electing Zuma to be president,” said former ANC chief whip Jackson Mthembu. “We should have looked closely into the man. With hindsight we made a terrible error of judgment.”

Declining electoral support for the ANC and public anger at corruption revelations encouraged the party to pressure Zuma into resigning before his second term was due to end in mid-2019.

Zuma was booed in front of foreign dignitaries at liberation hero Nelson Mandela's memorial service in 2013, lampooned in the media and criticised for overseeing years of economic decline.

But what many saw as Zuma's folksy charm, and his modest upbringing, ensured he retained support, especially in rural areas.

Former president Jacob Zuma has officially handed himself over and is in police custody.
News
11 months ago

During the apartheid era, Zuma was jailed for 10 years with Mandela on Robben Island. Later he went into exile, before returning as white rule came to an end.

He proved wrong the commentators who repeatedly wrote off his political career, earning the nickname the “great survivor”.

Ronnie Kasrils, a former intelligence minister and anti-apartheid veteran who spent years in the ANC underground, said Zuma was not the simple man he portrayed himself to be.

“Astute and engaging from earlier days, along the way Zuma has become driven by a lust for wealth and power,” Kasrils wrote in his biography of Zuma.

Using skills honed as the ANC's intelligence chief during apartheid, Zuma silenced dissenting voices by promoting little-known officials who did his bidding to powerful positions in the security and intelligence portfolios.

Former president Jacob Zuma is "on his way" to hand himself over to prison authorities in KwaZulu-Natal, his foundation confirmed.
News
11 months ago

Zuma also ensured the top leadership of the ANC was always controlled by loyalists.

“The politics of patronage sustained Zuma,” said Bantu Holomisa, an opposition leader and former ANC member. “All those who would have questioned him were rewarded with cabinet posts and ambassadorships abroad. Those who were deemed undesirable were ferreted out of the ANC.”