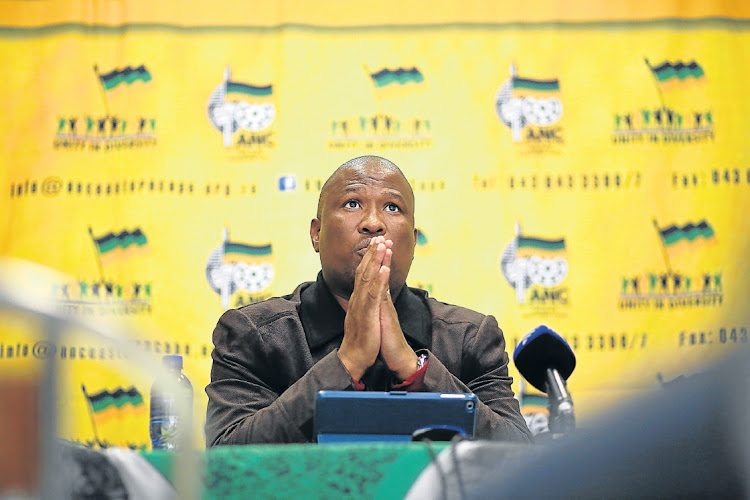 Oscar Mabuyane claimed in the court papers that he was never involved in soliciting the donation made by Phala in 2018.
Image: MARK ANDREWS

Under fire premier Oscar Mabuyane, who faces the toughest week of his political career, has accused his former chief of staff of being the kingmaker in the controversial R2.2m donation.

In his affidavit to the Bhisho high court, which was filed last month but leaked on Wednesday, Mabuyane accuses Baphelele Mhlaba of allegedly facilitating a R2.2m donation from Limpopo-based businessman Masilo Phala.

It comes in the wake of a report by Public Protector Busisiwe Mkhwebane, which made damning allegations against prominent leaders in the Eastern Cape, including the premier and public works MEC Babalo Madikizela. The donation is one of the issues raised in the PP report.

On Thursday, Mhlaba hit back at claims by Mabuyane that he facilitated the donation.

Mabuyane claimed in the court papers that he was never involved in soliciting the donation made by Phala in 2018.

In his affidavit, Mabuyane said: “Phala was requested by Baphelele Mhlaba, a member of the fundraising committee of the ANC, to deposit R2.2m as a donation into the account of a company known as Mthombeni Projects [a company owned by Mthatha businessman Lonwabo Bam].”

Mabuyane said there was a political ploy to discredit him and his leadership by individuals from the Free State, and singled out former secretary-general Ace Magashule.

Mkhwebane’s report and two affidavits filed by Bam implicate at least two MECs, Mabuyane and the ANC as having benefited unduly from the R2.2m, a few days after Phala received a R38.3m tender to provide yellow fleet for the provincial transport department.

Proof of payment for the amount was sent to Bam by Phala, confirming that he had effected the payment.

On Thursday, Mabuyane said the matter was now before the court and urged DispatchLIVE to wait for court day.

“Mr Mhlaba answered succinctly to the public protector. Check the report [PP’s]; there’s nothing that involves me there. ”

The public protector has directed the Hawks to investigate allegations that Eastern Cape premier Oscar Mabuyane received R450,000 to renovate his ...
News
3 months ago

Speaking to DispatchLIVE on Thursday, Phala denied even knowing Mhlaba, who is the project manager at the Eastern Cape Socio-Economic Consultative Council.

“The case is with my lawyers so I can’t say anything until it is wrapped up. I don’t know who Baphelele is,” said Phala. Mhlaba said before declining to comment any further: “The people who are accusing me must do so on a fair basis and not via the media.”

It is alleged that Phala paid R2.2m into Bam’s business account on August 11, 2018 after receiving a R38.3m payment from the provincial transport department.

Bam further alleged that on August 14 2018, Madikizela called Tikana-Gxothiwe, the transport MEC, and spoke to her in his presence, informing her that the money was available and that she should send Madikizela the account details where the money should be deposited.

A public spat has erupted between the ANC in the Eastern Cape and the office of advocate Busisiwe Mkhwebane, over the public protector’s recent ...
News
3 months ago

Tikana-Gxothiwe allegedly sent the bank account details to Madikizela, who in turn sent the details to Bam’s phone where a R400,000 payment was completed .

Tikana-Gxothiwe refused to explain her actual role in the saga when called by the Dispatch on Thursday.

She would also not be drawn into commenting on being named in Bam’s affidavit or about the R38.3m paid by her department into Phala’s business account.

“This is a procurement matter so the administrative head is the relevant person to comment. I have not even seen the report and if it was sent it would go straight to the head of department,” she said.

‘I have no such power’: Ace Magashule on Oscar Mabuyane assertion

Asked about allegations made by Mabuyane, Magashule simply said: "I have no such power."
Politics
3 months ago

Rantjie said the procurement had been done by National Treasury. Departments participating in the contract then order vehicles using that contract .

“The service provider was paid for a variety of construction plant items. It is important to note that we believe that proper procurement processes were followed by National Treasury, ” she said.

Madikizela, who is also the ANC provincial treasurer, also filed papers challenging Mkhwebane ’s report on the Winnie Madikizela-Mandela R1.1m memorial service funds, which he is alleged to have personally benefited from.

Notyesi said Madikizela believed Mkhwebane had erred in her conclusions about him and had relied on wrong facts.

On Wednesday, Mabuyane used the party’s campaign trail in Duncan Village to lambaste the Hawks for instituting an investigation against him which he was said was without merit.

Speaking to party members, Mabuyane said they would not be “blinded with torches with no illumination, even if they bring the Hawks from the Free State or anywhere else”.