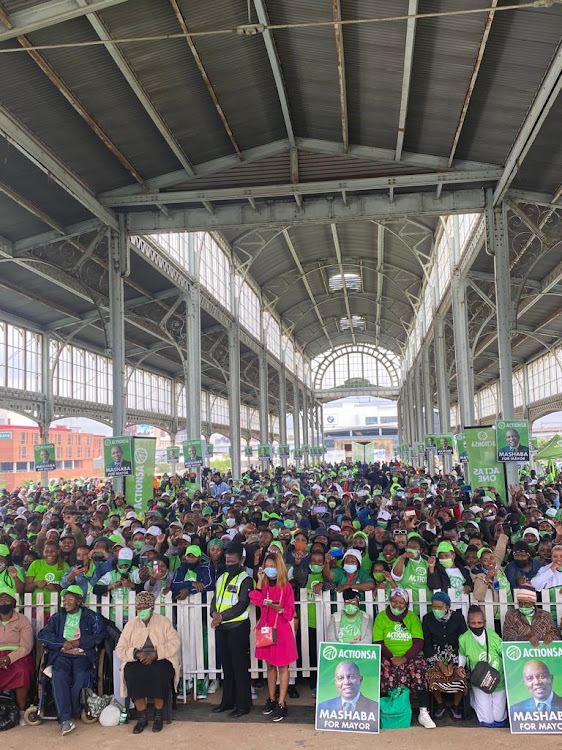 Political newcomers ActionSA have cautioned voters against voting for established political parties masquerading as criminals and anarchists when they head to the polls on Monday.
Image: ActionSA via Twitter

Political newcomers ActionSA have cautioned voters against casting their ballots for “criminals and anarchists masquerading as established political parties”.

These parties, he said, had created dysfunctional municipalities over the years, and had failed to deliver basic services, eradicate corruption, create jobs or revive the public service. This is according to party leader Herman Mashaba who addressed hundreds of supporters in Johannesburg on Thursday in the party’s final campaign rally.

The party says it will ensure that voters are no longer subjected to the abuse they endured for years under the existing parties — if ActionSA is voted into power.

“The ANC is a criminal syndicate, not a political party, that attempted to fool us all with the idea that Cyril Ramaphosa would change our country with his ‘New Dawn.’ The DA tells you it 'gets things done', but ask the people of our capital city if they agree after three mayors and a provincial administrator in just five years.

“The EFF loves anarchy, proposes policies that will destroy this country, sips tea with Jacob Zuma in Nkandla, and wants to open our borders to start the United States of Africa. To them I say, 'You can go try that nonsense far away from here. Not in SA and not on ActionSA’s watch'," Mashaba said.

Political newcomer ActionSA is hoping to take full control of the city of Johannesburg after the November 1 municipal elections, despite its troubles ...
Politics
1 month ago

The party promises to fix municipalities and provide the dignity of services to those who have never had them before. It believes it should be given a chance to govern because its leadership is tried and tested.

“We have assembled a leadership that has a track record in fighting corruption that no other party can so much as dream of coming close to. I can say to you that ActionSA will fight corruption, because we have leaders who didn’t just talk about it, they actually fought it, because actions speak louder than words,” he said.

Turning to coalition politics, Mashaba reiterated his stance that he would never work with the ruling party. But, in the same breath, said he was not oblivious to the fact that coalitions were the future of SA’s politics.

“We commit ourselves to only enter coalitions with other parties after we engage the residents of municipalities, and they give us such a mandate. We will never take your vote and put it alongside another party that you did not want to vote for.

“Without going another step further, and while other parties say one thing and do another, let me be very clear: ActionSA will never go into coalition with the ANC. We believe this because you cannot fix the problem by partnering with the cause of the problem,” he said.

Mashaba appealed for votes from the more than 18-million people who did not cast their votes during the 2019 elections.

“The time has come for us to take back our power from political parties that say one thing in public and do another when the cameras are off.

“Come with your family, your friends, your colleagues and your neighbours, but whatever you do, come out to vote — because the work to fix SA starts on Monday. The time has come for us to liberate ourselves. They have masqueraded as our liberators for far too long,” added Mashaba.