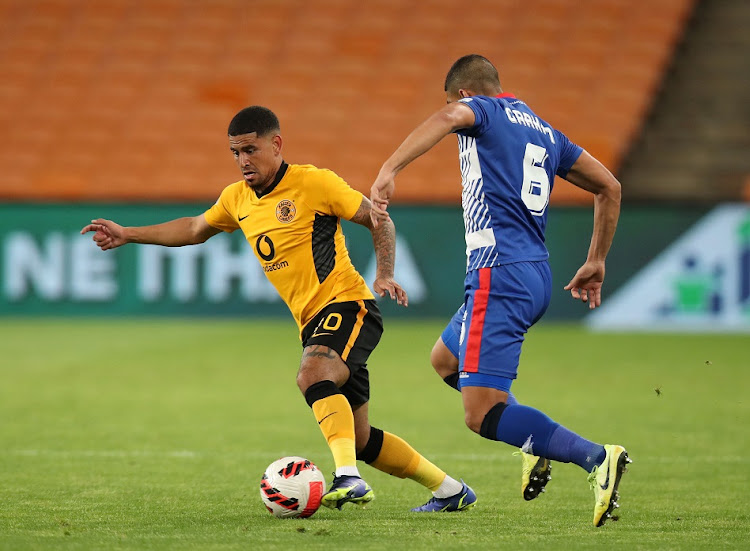 Keagan Dolly of Kaizer Chiefs is challenged by Travis Graham of Maritzburg United in the DStv Premiership match at FNB Stadium in Johannesburg on December 22, 2021.
Image: Muzi Ntombela/BackpagePix/Gallo Images

Kaizer Chiefs will wonder what might have been had a wave of Covid-19 not washed through their headquarters in Naturena, with the recovering Amakhosi impressively dispatching Maritzburg United 2-0 in Wednesday night’s DStv Premiership clash.

Khama Billiat made a scoring return from Covid-19 isolation at the FNB Stadium to put Amakhosi ahead in the 36th minute. Nkosingiphile Ngcobo, introduced from the bench, continued his renewed lease of life, finally getting game time this season with a second fine strike in three games in the 80th.

Phathutshedzo Nange was another returnee in midfield, as Chiefs’ technical team of still-isolating coach Stuart Baxter and assistant Arthur Zwane on the bench made four changes plus positional switches from Amakhosi’s 1-0 defeat to Royal AM at Chatsworth Stadium on Sunday.

Chiefs should lose their six points for not being able to honour their December fixtures against Cape Town City and Golden Arrows. That is, barring success in their appeal at the SA Football Association or perhaps the courts, against the Premier Soccer League’s decision to decline Amakhosi’s requests for postponements.

Social media was buzzing with reaction to Chiefs' loss, with many mocking the club.
Sport
1 month ago

In the three games Amakhosi did play, with varying degrees of strength of line-ups and squads disrupted by isolating and cancellations of training by the 50-plus cases of Covid-19 at the club, they won two and lost one.

Chiefs came through their torrid month in third place, and will wonder how many points they might have accumulated without their untimely disruption.

Against Ernst Middendorp’s innovative, structured Maritzburg, Amakhosi began to flex their muscle from the half-hour, largely driven by Keagan Dolly’s influence on the right.

A delightful build-up down the right started with Billiat chipping wide, Siyabonga Ngezana heading into the path of Dolly’s run, who fed Billiat again to strike wide of the left upright.

A similar pattern led to the goal. Maritzburg goalkeeper Marcel Engelhardt’s goal-kick went as far as Blom at the halfway line to head to Dolly, who fed the run inside of Blom into the box, who squared for Billiat to knock in a close-range finish.

It could have been two as Dolly’s 50-yard pass from the right found the run alone on the left of Siphosakhe Ntiya-Ntiya, who volleyed over.

Inside the second minute back from the break Daniel Cardoso almost conspired to hand United the lead, his weak back-pass to Daniel Akpeyi intercepted by halftime substitute Bongokuhle Hlongwane, who could only touch onto Chiefs’ keeper.

Three set pieces by Maritzburg saw the KwaZulu-Natal team come within inches of equalising. Keegan Ritchie’s free-kick from just in front of the left touchline swerved goalwards, Akpeyi touching across the face for a corner.

The first corner from the right by Ritchie was headed out for another, and the next skimmed the head of Chiefs defender Ramahlwe Mphahlele onto the foot of the far post.

Royal  AM did the double over Kaizer Chiefs this season with a 1-0 home win at Chatsworth on Sunday as Victor Letsoalo’s first half penalty proved ...
Sport
1 month ago

Crossing from his natural left, Ritchie's delivery was turned by Ngezana just over Akpeyi’s bar.

Chiefs rode the storm of those and other dangerous balls from Ritchie, then found their stride on their transitions.

Ngcobo replaced a groggy and perhaps concussed Nange in the 73rd. Seven minutes later Billiat won the ball off Phumlani Ntshangase and laid on a pass to Ngcobo on the right of the box, who took the ball onto his left foot past centreback Riyaaz Ismail and curled a tasty finish past Engelhardt. Ntshangase limped off soon after.