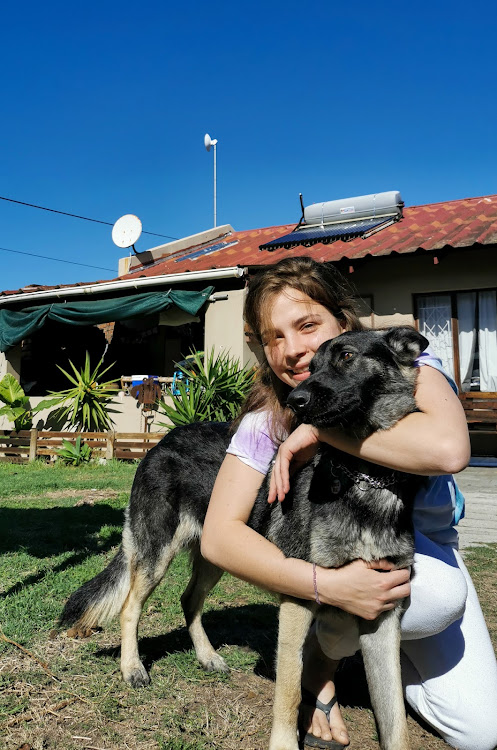 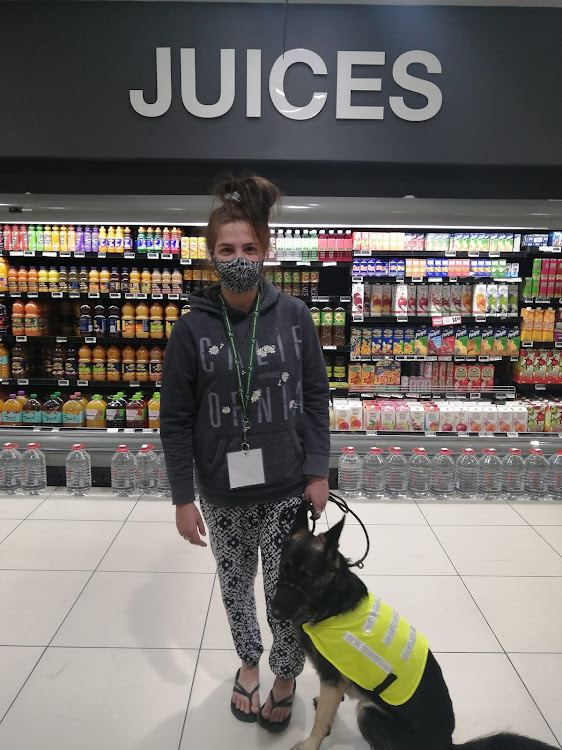 For 19-year-old Kayleen Dryer, something as simple as going to the supermarket has been a frustrating and daunting experience for the past year.

The Gonubie resident suffers from non-epileptic pseudo-seizures and requires the assistance and presence of her therapy dog, Harley — an 11-month-old German shepherd — to complete daily tasks such as grocery shopping.

“Harley is like a walking comfort blanket for me,” said Dryer, who started having seizures in April 2019.

“He makes my life a lot easier and I'm able to do everyday things without being scared. Harley can alert people when I'm having a seizure and if I have one he helps me come out of it.

“He can also sense when I will have a seizure. He'll start whining in the morning and I know that means I'll have a seizure over the next 12 to 24 hours. It helps me to plan my days.”

Dryer said in the past she had up to six seizures a day, but with Harley around they had become less common as well as less aggressive.

However, frequently having to explain this to managers and security guards at various stores for up to 20 minutes before being allowed inside, or ultimately being turned away, has made life difficult for Dryer and Harley.

“When I have to explain, sometimes the more I tell people that he's a therapy dog and I need him, the more frustrated and defensive they get. 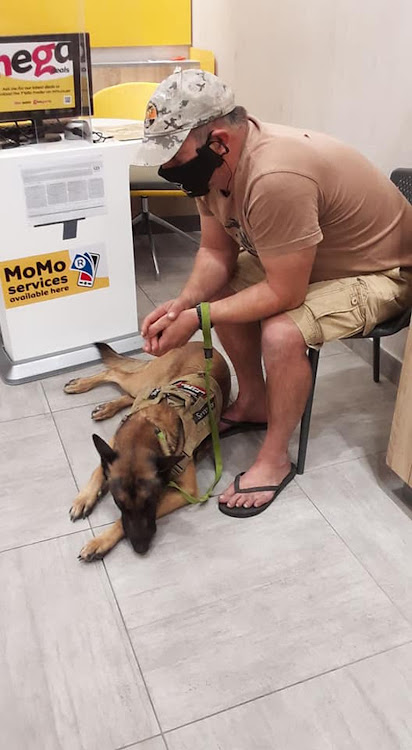 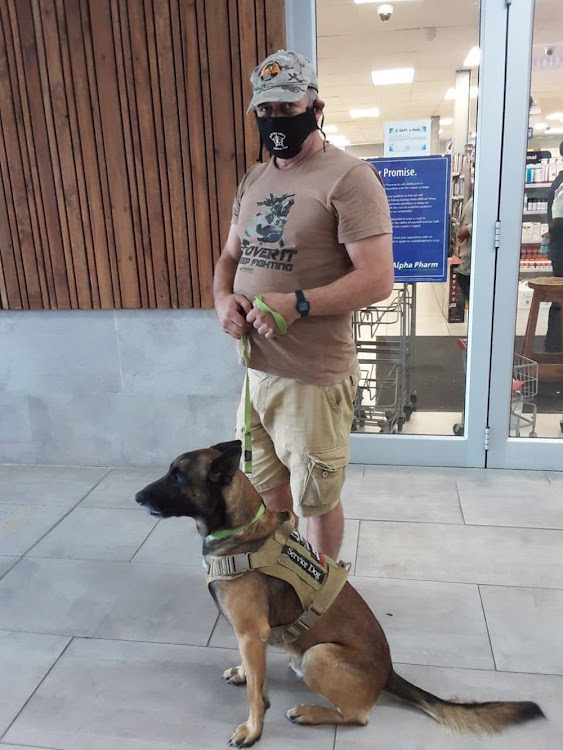 “Sometimes when I am allowed in, other people complain and I get weird looks too. It makes me not want to go anywhere. I feel like I can't live a normal life and do everyday things,” said Dryer who decided to get Harley after her psychologist suggested it might help her.

From odd stares to arguments with security guards and managers, well-known former private investigator, Christian Botha has had major issues entering shopping malls and other stores with his service dog in East London.

Botha, 52, was diagnosed with complex PTSD (post traumatic stress disorder) and has had Marli — a two-year-old Belgian Malinois —  for just over a year and a half.

Reminiscing on bad experiences at various establishments in East London, Botha said he and Marli were once surrounded by six security guards at an EL mall telling him that pets were not allowed inside.

“It's enough of a battle just being there [in a mall or shop] among other people and then to have to endure the embarrassment of being asked to leave or arguing to be allowed to stay. It's very frustrating.”

“People often asked me if I'm blind — I got so tired of it so now Marli's jacket states he is a service dog specifically for PTSD. People still come up to me and ask me what that is.

Botha now lives in Kleinemonde and often goes to Port Alfred for his medication and shopping.

He said some of the main reasons he was asked to leave malls, shops and even some clinics, was because 'pets are not allowed' or 'the dog is scaring other people'.

Botha said Marli was obedience trained and well behaved. Marli was not a pet, but an extension of himself and essential for him to be able to complete daily tasks.

“Your service dog becomes a part of you and as soon as I put Marli's vest on he knows that he's working. He's very well trained.”

“Psychiatrists have done everything they can for me and there is no cure for PTSD. I'm on medication and I have to learn to live with it,” said Botha.

A shipment of 29 primates from the DRC was intercepted in Zimbabwe  on Wednesday. The illegal shipment was headed to SA
Africa
1 year ago

“I decided to get Marli after watching a programme where US veterans used dogs as therapy animals and I thought that it may help me. Marli has done wonders for me; he got me out of the house again.”

Before Marli, Botha said he spent two years never leaving home. “For two years I sat inside and stared at trees. I wouldn't even go out of our gate onto the street.”

Today, Botha does not leave the house without Marli. “He goes everywhere with me and he's helped me relax a lot. I'm always on high alert and I get very anxious and claustrophobic if there are too many people around me, but Marli can sense when I'm not OK and he knows exactly how to calm me down,” said Botha.

“I don't like it when people come up behind me so when I'm at the cashier paying for something Marli will sit behind me and face the other way to make sure people don't get too close.”

“It took a long time and a bit of explaining, but at least now when I go out in Port Alfred everyone knows Marli and most places accept us without any trouble, but there are some shops I will never ever go to again in East London because I've had such bad experiences.”

EL-based dog trainer, Andrea Mento said SA was behind when it came to regulations surrounding therapy and emotional support dogs. She said for a pet to be officially considered an emotional support or therapy animal, it needed to be prescribed by a licensed health professional.

While we have been focused on the physical impact of Covid-19, the mental impact could arguably be just as great - not only for adults but children ...
News
1 year ago

In other words, a psychiatrist, therapist or psychologist must decide that an animal is needed for the mental health of a patient. “Patients need a letter from their doctor, psychologist, or psychiatrist indicating that they require a therapy dog. In SA the laws surrounding therapy and emotional support dogs are also very vague. There are no specific regulations on where these dogs can and cannot go,” said Mento, who owns Muddy Paws Mobile Pet Care.

Mento said various health conditions, not all easily noticeable such as Botha's PTSD or Dryer's non-epileptic pseudo-seizures, could require the assistance of emotional support, therapy or service dogs.
,
These include diabetes, extreme anxiety, depression and other conditions such as autism.

“There are also autism support dogs who accompany children or adults with autism to decrease their anxiety levels and help them connect, relate to the world and navigate through life,” said Mento.

“For the most part people understand why someone with a physical disability needs the assistance of a working dog, such as a blind person who requires a Seeing Eye dog, but it's very different when people cannot 'see' the disability.”

With songs and sedation, experts aim to rescue Kaavan the Islamabad elephant
News
1 year ago

SA Guide Dogs Association (GDA) spokesperson Pieter Van Niekerk said Section 9 of the SA constitution prevented the unfair discrimination on the basis of disabilities, and the Promotion of Equality and Prevention of Unfair Discrimination Act gave effect to this section.

Violations include failing to remove obstacles that unfairly restrict disabled people, failing to take reasonable steps to accommodate their needs, or depriving them of goods or services because they are disabled.

He said the Foodstuffs, Cosmetics and Disinfectants Act prohibited animals, except for a guide dog handled by a blind person, from entering areas where food was prepared or handled.

The association believes that by extension, this should also apply to registered service or support dogs for people who have other medical conditions.

“There isn't much legislation around the field of access for service and support dogs in SA, but we, as the GDA, are trying to work towards a minimum standard.

However Van Niekerk said the dogs had to be identifiable as service or support dogs and equipped with a jacket or vest.

According to the association the following rules need to be adhered to in order for a service or support dog to be allowed into public establishments:

Dryer has had Harley since October last year. She said she had only been allowed into three stores including Mr Price Sport at Retail Park without any issues.

At first Harley's identification was a bandanna, but Dryer said she always carries her medical information on her. Now Harley also wears a yellow vest for easier identification as a therapy dog. “I'm still waiting for his proper vest, but I have a small laminated version of my doctor's letter saying that I need a service dog. I carry it with me whenever he and I go out together,” said Dryer.

“The Debi-Lee Spar in Greenfields and Gonubie Spar are the only two supermarkets that have allowed me in with Harley and it really makes my life a lot easier. I'm so grateful to them for allowing me and Harley in without any problems.

The Debi-lee Spar have actually contacted me and welcomed me to their Spar any time I'm in EL.

“Before Harley I couldn't go anywhere alone. I was looking for a way to monitor my health and I didn't want to rely on my mom all the time and feel like I couldn't do anything on my own,” said Dryer.

“Most of his training so far has been basic obedience training and exposing him to my seizures so he understands what's good and what's bad. He's very docile and he sticks by me and doesn't bother anyone when we go out,” Dryer said.

Botha said often the first people you meet at any establishment are security guards and in his experience they almost always turned him and Marli away, before managers became involved and decided whether he and Marli could stay or not.

“I don't want to blame these establishments or the guards because they are just doing their jobs, but there needs to be more training or awareness done for guards and managers when it comes to dealing with service dogs and their owners,” Botha said.

“The Debi-lee Spar have actually contacted me and welcomed me to their Spar any time I'm in EL. That really uplifts you and its great to see them trying to create that awareness and acceptance.”

Van Niekerk said the association dealt with access issues on a daily basis and the lack of knowledge about service dogs was a major issue.

“The biggest issues are that many are not informed about these dogs and why they are so vital for their owners, but there are also a lot of people who take chances and claim their pet is an emotional support dog to try to get them into stores, malls and restaurants,” Van Niekerk said.

“This makes it difficult for the people who really need these dogs, but it makes it tough for retailers as well.”

Mento said to her knowledge there were very few stores in East London that allowed people who required therapy or support dogs to enter with their animals.

She said these establishments included the Debi -Lee Spar, Gonubie Spar, Abbotsford KwikSpar, Luxe Boutique and pet shops, Pampered Pets and Fido and Felix, but there may be more she was unaware of.