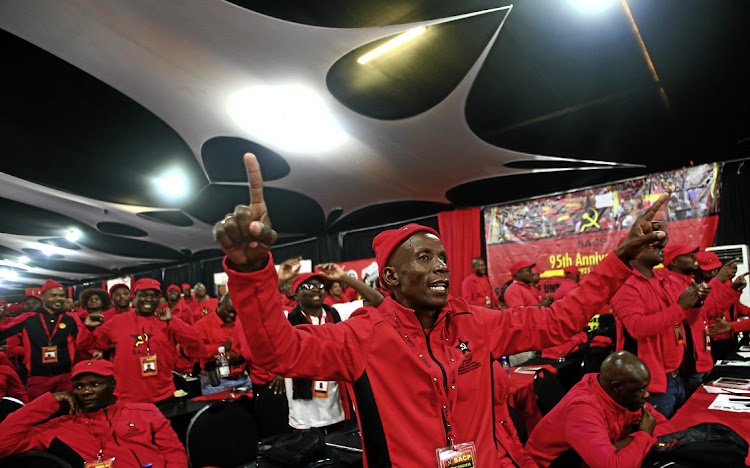 The South African Communist Party says it will lobby for the National Assembly to begin a process to review public protector Busisiwe Mkhwebane’s fitness to hold office.

At a media briefing at the Constitutional Court on Thursday, SACP spokesman Alex Mashilo said South Africa was facing a "concerted fightback against the renewal of our society by many of those implicated in state capture".

He was reading a joint statement by the SACP and other civil society organisations such as the Ahmed Kathrada Foundation.

"There is an attempt to subvert the processes under way to rebuild efficient and ethical governance, so that they may remain unaccountable. State establishments, legislative bodies, political parties and private entities continue to be used by networks of the state capture fightback to hamper efforts to clean up our government," he said.

'Of course, you are racist. You are,' Jackson Mthembu tells EFF MPs

Minister Jackson Mthembu has accused the Economic Freedom Fighters of being racist towards South Africans of Indian origin.
Politics
2 years ago

"We will make it clear that we refuse to allow ministers, public officials, whistle-blowers, activists and journalists who speak out against state capture to be targeted, subdued and defamed by political bullies, individuals and entities who seek to undermine their efforts."

The protest is scheduled to take place outside Johannesburg's city hall.

Mashilo lashed out at Mkhwebane, saying he found it "concerning" that the Revenue Services's "rogue unit" narrative was again being perpetuated.

"What is disturbing is that this effort is premised on recent reports by the office of the public protector. Public money, going into the billions, has been diverted from state coffers over the past few years, but the public protector seems to be overly preoccupied with the old rogue unit narrative," he said.

"This narrative has been previously exposed as being a tool that was used to cripple Sars’s capacity and its effectiveness … The same approach is now being applied to the broader state capture project."

EFF bid to block Gordhan's speech 'one of the lowest points in our democracy': Madonsela

In its campaign, these organisations will, among others, call on the National Prosecuting Authority to press charges against those implicated in state capture and lobby for the National Assembly to begin a process of reviewing Mkhwebane’s fitness to hold office.

SACP deputy general-secretary Solly Mapaila said the narrative that Gordhan was "anti-black" was untrue and was created to perpetuate corruption in state-owned entities.

"People like Gordhan should be protected by all of us. If we allow someone like Gordhan to fall, all of us will fall one by one, corruption will never be defeated," he said.

"We fought very hard to be where we were, we can’t allow to be taken back … It’s high time that we get more vigilant and mobilised and particularly deal with the criminal elements, some which have held our democratic institutions at ransom."

EFF thugs are a short hop from Idi Amin, and it suits the ANC fine

WATCH | 'Try touch me': Gordhan snaps back at EFF in parliament

There was a tense stand-off in parliament on Wednesday when EFF MPs approached the podium in an attempt to prevent public enterprises minister Pravin ...
News
2 years ago

In the realm of law and order, South Africa is a country of press releases and words of condemnation – but no action.
News
2 years ago