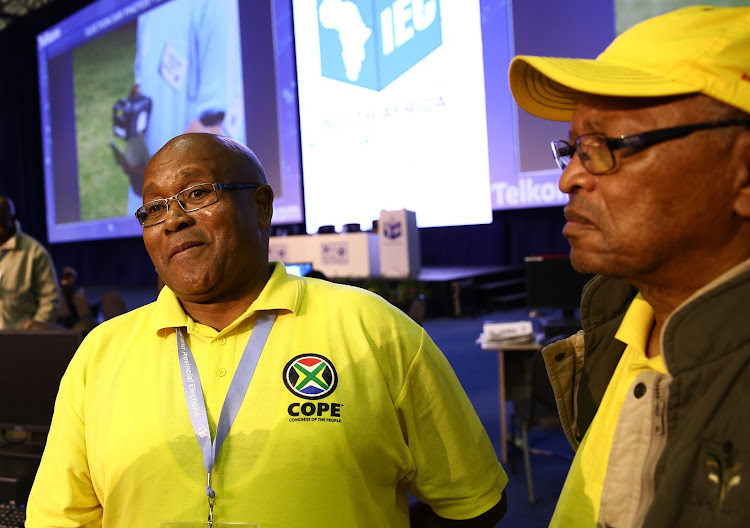 Cope head of elections, Mzwandile Hleko talks about the objections they have raised with the IEC relating to double voting and scanners not working.
Image: Masi Losi

Dozens of political parties contesting the 2019 elections have raised concerns about possible voter fraud amid widespread reports of irregularities by the close of voting.

The Democratic Alliance on Wednesday evening raised 600 concerns with the Electoral Commission (IEC), with their most pressing concern being reports of double voting.

The EFF, too, raised this concern in a letter submitted to the commission as polls across the country closed.

The ANC, however, said this was mere “hullabaloo” as voter fraud could be easily detected.

COPE’s Deidre Carter tells how she went to 5 voting stations and could have voted in all five if she wanted to, as she was given the sticker in each station. Also she brought Domestos to show how easy it is to remove the “indelible” ink.

The DA’s Mike Moriarty said the fact that ink used to mark voter thumbs was removable created concern that people could vote twice.

“We have raised concerns about possible fraud,” he said, adding that many "zipzip" machines meant to scan ID’s of voters at voting stations were not working.

Moriarty said of the 600 concerns raised, many were about ballot papers running out.

The EFF’s Leigh-Anne Mathys said they wrote a formal letter to the IEC raising concerns about possible voter fraud.

“We have raised serious concerns but they have not responded yet,” she said. Mathys said while they don’t want to “jump the gun”, the party was quite concerned.

It was the same case for Cope. The party's head of election Mzwandile Hleko said they raised concerns of the ink being easily removed.

“We are worried that people double-voted and the fact that we are having these problems 25 years after (the start of) democracy,” he said.

A Russian NGO allegedly behind an unsuccessful plan to interfere in the South African elections appears to be part of an attempt to gain an economic ...
News
3 years ago

The UDM’s Thandi Nontenja said the party was still processing a host of complaints regarding the names of deceased people propping up at various voting districts on Wednesday.

The party had, by 9pm, received 25 submissions of deceased persons whose names had been used to cast votes in Eastern Cape and Limpopo.

Nontenja said they were able to verify three cases at the Ngcwanguba Junior Secondary School in Eastern Cape – a fourth, which the party is still investigating, is a vote from a 103-year-old woman.

In Limpopo, the contact numbers of three deceased voters allegedly dialled through to a local ward councillor.

But Nontenja said she is concerned that the IEC “does not have any answers” to their complaints. She said the organisation “is mumbling” and she questioned whether its control methods are effective.

The people have spoken

Despite some voting stations not being open by late afternoon, shortages of ballot boxes and confusion over fake nails, the IEC said it was satisfied ...
Politics
3 years ago

The Black First Land First Party said they have recorded specific incidences of double voting in the Lindhurst primary school in Durban and at a voting station in Jabulani, Soweto.

The Good party’s Nthabiseng Lephoko said they raised more than 50 concerns throughout the day.

While they were worried about double-voting, she said they raised objections over the ANC in some voting stations in Gauteng giving out T-shirts inside the voting stations. This is illegal, she said.

ANC spokesperson Dakota Legoete said they trusted the electoral commission’s process and did not believe voter fraud was a concern.

“It is very easy to detect,” he said of voter fraud, which he said could be picked up through the "zipzip" machines, the indelible ink and physically striking off people from the voter’s roll.

The IEC said at an earlier press conference that it will investigate all complaints raised with them.