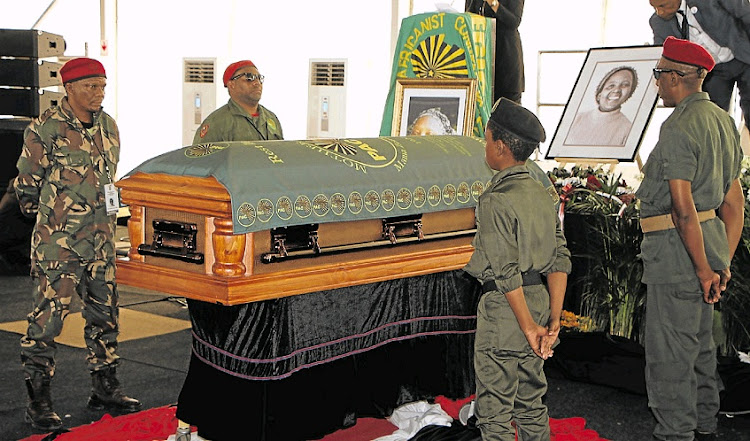 The grandson of PAC founding president Robert Sobukwe, Tshepo Sobukwe, has slammed the government and the PAC for using his grandmother’s funeral for their own “selfish” purposes.

Mama Zondeni was laid to rest at her Graaff-Reinet home last weekend. The funeral was characterised by drama after PAC members demanded that her coffin be draped in the party’s flag as opposed to the country’s.

She was afforded an official state funeral, which dictated that the coffin be covered in the South African flag.

Tshepo blasted the “opportunistic” South African government and the PAC for hijacking the funeral to serve their own purpose, saying when Mama Zondeni was still alive, they were nowhere to be seen.

He described the chaotic scenes at the funeral, which saw the government pulling out and deputy president David Mabuza being whisked away due to security fears, as “painful”.

Chaotic scenes erupted at the funeral when a PAC factional grouping stormed the marquee, forcing Mabuza to flee.

A last-minute decision by the Sobukwe family to allow members of the PAC to have their way at the state funeral of the late Zondeni Sobukwe, averted ...
News
3 years ago

“The mayhem escalated when the PAC was given a platform to co-host the funeral because they hijacked the platform and did their own things that were not planned,” Tshepo said.

The majority of the crowd also yelled “we don’t want die stem”, and “you were not there for mama”.The Daily Dispatch has in its possession pictures of members of the crowd clad in PAC colours drinking alcohol outside a business in the city centre.

Moments later the same group was seen by the Dispatch disrupting proceedings inside the botanical gardens, where the service was held.

“The Sobukwes could have indicated in the preparatory meetings with them that the government or the official funeral is not required . We certainly would have respected the family’s wishes,” government spokesperson Phumla Williams said.

Former First Lady Zanele Mbeki is among the high-profile personalities who will pay their last respects to anti-apartheid activist Zondeni Veronica ...
Politics
3 years ago

A last-minute decision by the Sobukwe family to allow members of the PAC to have their way at the state funeral of the late Zondeni Sobukwe, averted ...
News
3 years ago

The small town of Graaff-Reinet in the Eastern Cape today is buzzing as scores of PAC supporters stream into the town to bid farewell to the late ...
News
3 years ago

The Sobukwe family has welcomed President Cyril Ramaphosa’s decision to grant Zondeni Sobukwe a special official funeral. The mother of Azania, as ...
News
3 years ago